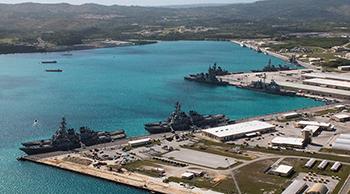 North Korea’s leader, Kim Jong-un, has urged Washington to make the “right choice” and avert any confrontation after he was briefed on the plans of an “enveloping” strike on the US territory of Guam. The Pentagon meanwhile warned that any strike against the US could “very quickly” escalate into war.
North Korean General Kim Rak-gyom briefed Kim on the Strategic Force’s plan for an “enveloping fire at Guam at the command post.”

Pyongyang may hit US targets in S. #Korea if provoked by Americans – Russian general to RT https://t.co/jQxyz1x2qFpic.twitter.com/XnZdN2sHzr
— RT (@RT_com) 11 August 2017
After studying the plan “for a long time” and having “discussed it” with commanding officers, the North Korean leader ordered the army to be fire-ready should he and the ruling party make the decision to further demonstrate his country’s military power.
At the same time, though, Kim urged the US leadership to pursue de-escalation efforts in the ongoing tensions.
“The United States, which was the first to bring numerous strategic nuclear equipment near us, should first make the right decision and show through actions if they wish to ease tensions on the Korean peninsula and prevent a dangerous military clash,” Kim was cited as saying in a report by state news outlet, KCNA.
Preparing for Armageddon: ‘How to survive nuclear war’ search surges in tensions with N. Korea. WATCH: https://t.co/BKNMYVLmQIpic.twitter.com/GdeKIsqfrm
— RT (@RT_com) 13 August 2017
During Kim’s visit to the Command of the Strategic Force of the Korean People’s Army (KPA), the North Korean leader further urged the US to stop its “arrogant provocations against the DPRK,” including making “unilateral demands.”
Tensions between the US and North Korea soared to new heights last week, following a series of Donald Trump comments in which he threatened to unleash “fire and fury” if Pyongyang continued to threaten the US with nuclear weapons.
On Monday, the Pentagon made clear that a Pyongyang missile fired at the US would be considered a declaration of war.
3.5mn volunteers ‘ready to retaliate against US’ – North Korean state media https://t.co/mTumXbwcMy
— RT (@RT_com) 13 August 2017
“If they fire at the United States, it could escalate into a war very quickly,” Defense Secretary James Mattis told reporters. He added, however, that if the projectile does not pose any immediate threat it would be up to politicians to decide what to do next.
“War is up to the president, and perhaps up to Congress,” Mattis said. “The bottom line is we will defend the country from attack.”
Stressing that US military would know the trajectory of a missile “within moments,” Mattis promised take out any missile that is headed towards Guam.
Prior to Mattis’ statement, Marine Corps Gen. Joseph Dunford, chairman of the Joint Chiefs of Staff, said Washington is ready to use the “full range” of its capabilities if provoked by North Korea.
Dunford is currently on a diplomatic mission to Asia to muster support for American actions against North Korea. On Monday, the General landed in China after visiting South Korea.
China and Russia have repeatedly called on both Washington and Pyongyang to come to the negotiating table to defuse the rapidly escalating tensions. Chinese President Xi Jinping called Trump Saturday to urge restraint regarding the North Korean crisis, advising both the US and N. Korea to avoid words or actions that could worsen the situation.
On Monday, the Russian foreign ministry, through its spokeswoman, once again urged all parties to avoid belligerent rhetoric which could lead to a nuclear war.
“We have repeatedly said that the situation is on edge. But despite this, we hear both the rhetoric of Pyongyang and the statements coming every day from Washington. The paradox is that they are identical. It is an open threat of use of force from both sides,” Maria Zakharova said in an interview with a Latvian radio station.
‘On the brink’: ‘#US & North Korean warmongering paradoxically identical’ – Zakharova https://t.co/8vm9nhX2QVpic.twitter.com/eYxU0IxCnR
— RT (@RT_com) 14 August 2017
She warned of the horrors of nuclear confrontation and the consequences it will have on the entire world.
“If people in 2017 do not understand what the threat of nuclear weapons is, that it is a threat to the entire world, then what are we talking about?” she asked, according to Sputnik.
Zakharova reiterated that the Russian-Chinese “double freeze” initiative, already rejected by Washington, could have been a way out of the crisis. The plan envisioned a simultaneous end to North Korea’s missile tests and a suspension of US-South Korean military drills.