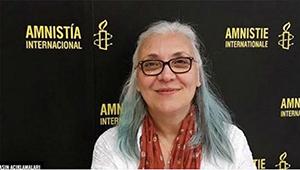 ByTM
Director of Amnesty International (AI) Turkey Idil Eser, who has been jailed since her detention on July 5 together with nine other human rights activists, has said they are being held hostage by Turkey to threaten Germany, the Cumhuriyet daily reported on Monday.

Main opposition Republican People’s Party (CHP) Deputy Chairman Veli Ağbaba and group deputy chairman Özgür Özel drafted a report after meeting with jailed human rights defenders Eser, Nalan Erkem, Özlem Dalkıran, Veli Acu and Günal Kurşun, who were arrested on terror charges after being detained on July 5 during a meeting at a hotel in İstanbul’s Büyükada district.
Arguing that she committed no crime other than defending human rights, Director of AI Turkey Eser said: “Due to OHAL [state of emergency] rules and KHK [government decree] restrictions I can only see immediate family members. But I don’t have any. I cannot see anyone. We are being held hostage to threaten Germany, but we are not Germans. I am the Turkey director of Amnesty International.”
Activist Dalkıran, who said they defended the rights of people from all segments of society, claimed one of the translators at the Büyükada meeting, who is suspected of being an informant, was translating poorly and that they warned her.
According to Dalkıran, the translator might have been feeling inadequate and filed a complaint about them, or she might have been sent there to act as a secret witness by people who knew about the meeting.
Turkey’s Ministry of Justice did not respond to the requests of CHP deputies who also wanted to meet with jailed German national Peter Steudtner and Swedish national Ali Gharavi.
President Recep Tayyip Erdoğan is believed to be detaining German journalists and human rights defenders to force the deportation from Germany of Turkish asylum seekers, who Erdoğan accuses of having mounted a botched coup attempt on July 15, 2016.
Turkey claims some key suspects in the perpetration of the failed coup in 2016 fled to Germany and is demanding that Berlin hand them over to the Turkish judiciary. German authorities have not responded to Ankara amid reports of torture in Turkish jails, especially in the case of coup suspects.
Erdoğan accused Germany of assisting terrorists by failing to respond to Turkey’s requests to hand over suspects wanted by Turkish authorities.