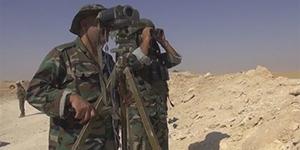 Moscow, SANA- The Russian Defense Ministry hailed the landing operation conducted by the units of the Syrian Arab Army in the depth of ISIS’ spreading areas between the countryside of Raqqa and Homs, describing it as “skilled ”.

“Overnight to August 12, for the first time since the beginning of combat operations against the terrorist organization of ISIS in Syria, Syrian government forces organized and conducted a skilled tactical landing operation behind terrorists’ lines with their subsequent defeat and liberation of the town of al-Kadir, about 120 kilometers west of Deir Ezzor,” the ministry said in a statement.
It affirmed that the operation was conducted under the command of General Suheil al-Hassan, one of Syria’s most renowned military commanders.
“Russian military advisers took direct part in the preparation of the operation and control over it,” the ministry noted.
On August 12th, Army units, in cooperation with the backup forces, conducted a night air drop 20 km behind the fronts of the ISIS terrorist organization to the south of al-Kadir town between Raqqa and Homs.
The army’s successful airdrop contributed to the advancement of the army units and the backup forces 21km to establish full control over Khirbet Makman and al-Kadir town, and to the advancement 12 km to the southeast of Raqqa to establish control over Bei al-Rahoum village.
Huge numbers of the ISIS terrorists were killed in the operations, in addition to destroying 3 tanks, 17 machinegun-equipped vehicles and 7 cars rigged with explosives and two tanks and a number of artillery pieces were seized.
Manar/Mazen