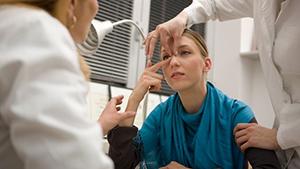 Amanda Mercer had been contemplating a nose job for years, but the idea of shelling out around $15,000 — and undergoing anaesthesia — kept the 20-year-old from booking an appointment. Still, she was bothered by the way she looked in pictures her friends would post online.

So when she heard of nonsurgical rhinoplasty, in which fillers are injected to shape a nose, she jumped at the chance to “fix” her face without going under the knife.

Mercer is one of hundreds of New Yorkers opting to sculpt their noses using fillers, a procedure that’s gaining traction on — and because of — social media. Like strategic makeup, the injections can contour a nose without the hassle, pain and price of surgery. (“It was like a pinprick,” says Mercer of her procedure.)

The treatment works by injecting small amounts of hyaluronic acid just below the skin on the bridge of the nose, and can straighten out bumps, camouflage asymmetry or rectify a botched rhinoplasty.

“[The fillers] create a pyramid [effect] so that when light hits the nose, it appears more contoured, less flat and thus less wide,” says Dr. Melissa Doft, who practices on the Upper East Side and treated Mercer. The effects last about a year, fading as the fillers are metabolized by the body.

Doft says the procedure is one of the industry’s best-kept secrets — although patients are catching on.

“Three years ago, I was doing one or two a month . . . now, it’s between 30 and 40 a month,” says Upper East Side plastic surgeon Dr. Dara Liotta, whose Instagram feed of “before” and “after” photos helps draw a mostly female, 20- and 30-something client base.

“For younger patients, the idea of getting injections is like getting your brows done — the guilt about that has changed so much,” she says.

And rather than heading to the doc armed with celeb headshots for inspiration, patients often show off their own selfies, edited to their liking using apps such as Facetune or Snapchat.

“They’ve really played around [with filters] and are like, ‘If my nose were like this, it would look good in photos,’ ” says Dr. Jennifer Levine, who’s based on the Upper East Side.

Surgeons say patients are also enticed by the low price — between $800 and $1,300, typically — as well as the lack of recovery time.

“It’s fast and it’s easy,” says Doft. “You really don’t bruise from it.”
Some also use fillers as a chance to test out a new look before making a permanent decision.

Nico Martinez, a 48-year-old actress, says she had been considering rhinoplasty since she switched from theater to film and didn’t like the way her nose looked on camera.

“I [thought], ‘Wow, I can try something on, and if it doesn’t agree [with me] or look a certain way, it’s not permanent,’ ” says the Upper West Sider, who underwent the procedure with Liotta in May 2015.

She liked the look so much she opted for surgery in July 2016.

As casual as the procedure sounds, it isn’t risk-free. Blindness could result from accidentally injecting filler into the retinal artery, which controls blood flow to the eye. Vascular compromise, or compressed blood flow to the skin over the nose, is another complication that can arise when filler is injected into the tip.

It also doesn’t work on every schnoz shape: Unlike surgery, fillers can’t shrink a nose that’s too big or has a boxy tip, hide a large hook or help someone with breathing problems.

Still, the treatment is only getting more popular — even among those who love their noses.

Says Doft, “It’s the next generation of makeup.”