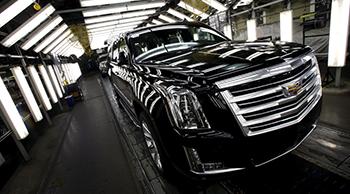 Talks on renegotiating the North American Free Trade Agreement (NAFTA) will begin in Washington on Wednesday. During his presidential campaign, Donald Trump promised Americans to pull the country out of “useless and unprofitable” trade pacts.

However, the goals set by the White House may put it on a collision course with the US auto industry.
The United States, Canada, and Mexico signed NAFTA in 1994 and has been heavily criticized by the new president. According to Trump, the deal which provides for tax-free trade between the three countries is taking vehicle plants and jobs away from the US to low-wage Mexico.
Trump’s primary reason for renegotiating NAFTA has been the drastic shift in the US’ trade balance with Mexico which has changed from a surplus of $1.3 billion to a deficit of $64 billion since the deal came into force.
The Mexican economy is highly dependent on the US with nearly 80 percent of exports going to the Northern neighbor. Any changes in the deal could have a huge impact in Mexico, on manufacturers and farmers in particular.
The commercial balance with Canada, America’s second largest trading partner, is more even, but those trade relations also have some stumbling points in such sectors as dairy, wine, and grains.
The Canadian economy is also reliant on trade with the US with more than 75 percent of the country’s exports going south across the border.
Canada’s #Trudeau needs to sell Trump on #NAFTAhttps://t.co/1m8rqLTUmCpic.twitter.com/2wBIE3ASJM
— RT America (@RT_America) February 13, 2017
Through renegotiating the trilateral deal Washington aims to decrease the trade deficit and to boost market access for US manufacturing, agriculture, and services in Canada and Mexico.
To increase employment in the auto industry in the US, White House negotiators will reportedly seek to strengthen the rules of origin – essential criteria to determine the national source of products. The step may shut out more parts from Asia.
At the same time, the US may insist on strengthening an unprecedented US-specific content requirement for Mexican vehicles.
The rules of origin reportedly have to encourage the sourcing of goods and materials from the United States and North America. The suggestion has raised concerns among auto industry executives and trade groups. Representatives are worried a renewed deal will guarantee a certain percentage of production for the United States.
The US automakers object to such a carve-out or to increase the proportion of a vehicle’s value that must come from the region above the current 62.5 percent that is already the highest of any trade bloc in the world.
#WTO allows #Mexico to impose trade sanctions against US https://t.co/D0aFp4yKszpic.twitter.com/vEuU3ZlkbA
— RT (@RT_com) April 27, 2017
The measure will increase spending and may break a supply chain that sees parts moving within NAFTA borders and makes North American cars competitive with Asia and Europe. The representatives say a better way to get the jobs back is to promote more vehicle exports.
“Our members feel very strongly that rules of origin are not the tools to use to reshore jobs into the US,” said Ann Wilson, senior vice president of government affairs for the Motor and Equipment Manufacturers Association, as quoted by Reuters.