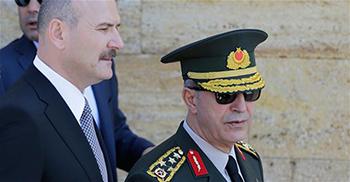 Iran’s Chief of General Staff Maj Gen Mohamed Baqeri is due to hold talks in Ankara with top Turkish officials, in a rare visit in which all regional security issues, the fight against terrorism, and developments in Syria and Iraq, including the Iraqi Kurds’ upcoming independence referendum, will be discussed.

“The Iranian Chief of General Staff will go to Turkey tomorrow [Aug. 15]. This is the first military visit at this level. The visit will take place upon the invitation [of the Turkish side]. Issues to be discussed are bilateral defense cooperation, regional developments, and border issues,” Bahram Qasimi, Iranian Foreign Ministry spokesman told reporters on Aug. 14 in Tehran.

Baqeri’s two-day visit will be a first of its kind since the Iranian Revolution in 1979, Qasimi noted, adding that “we need to increase our contacts at different levels.”

He also referred to preparations for the upcoming Turkey-Iran high-level cooperation meeting, which will be held in Tehran under the leadership of the two countries’ presidents, Recep Tayyip Erdoğan and Hassan Rouhani.

In Ankara, Baqeri will be hosted by his Turkish counterpart, Chief of General Staff Gen Hulusi Akar, and will meet with both President Recep Tayyip Erdoğan and Defense Minister Nurettin Canikli.

Sources say that one of the most important issues to be discussed in Ankara between two commanders will be enhancing cooperation on their shared joint border. Baqeri’s visit comes only a week after Turkey started building a wall along its border with Iran with the objective of improving security, halting the infiltration of Kurdistan Workers’ Party (PKK) militants, and illegal smugglers.

The Turkish authorities announced the construction of a 144-kilometer barrier in May as a means of blocking cross-border movements. The entire Turkish-Iranian frontier is around 500 kilometers long.

Talks between military leaders will also focus on the fight against the PKK and its Iranian offshoot, the Party of Free Life of Kurdistan (PJAK), which is active in Iran’s northwestern border region.

Another important issue the two countries’ militaries will discuss is the ongoing work to establish de-conflict zones inside Syria, following a three-way agreement between Turkey, Russia and Iran in May as part of the Astana Process. Although Turkey and Iran have different policies on the future of Syria and on the role of President Bashar al-Assad, they are working to provide a lasting ceasefire and thus a political solution to the ongoing civil war.

Another key issue that concerns both Tehran and Ankara is the looming independence referendum due to be held in the Iraqi Kurdistan Regional Government (KRG). Iran and Turkey have loudly voiced their opposition to the idea of holding the referendum at such a sensitive time in the region, warning the KRG leadership that the move would be a “grave mistake with serious consequences.”

The fight against the Islamic State of Iraq and the Levant (ISIL) will also be addressed by Baqeri and Akar, especially following the liberation of Mosul by the Iraqi military.