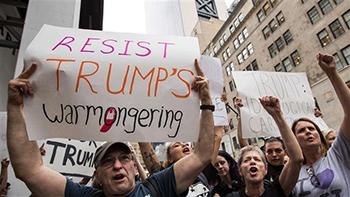 The US Justice Department has requested information on some 1.3 million visitors of a so-called resistance website used to organize protests against President Donald Trump, in what privacy advocates say is an unconstitutional “fishing expedition” for political dissidents.

The Los Angeles-based web hosting company Dreamhost revealed the investigation in a blog post on Monday and said it has been working with the department for months, providing it with bits of information such as the users’ IP addresses.
“That information could be used to identify any individuals who used this site to exercise and express political speech protected under the Constitution’s First Amendment,” DreamHost wrote. “That should be enough to set alarm bells off in anyone’s mind.”
The company said that it had filed a legal bid against the request and a hearing had been set in Washington for Friday.
In its legal statement, the company’s general counsel, Chris Ghazarian, argued that the department was trying “to identify the political dissidents of the current administration” and “understand what content each of these dissidents viewed on the website.”
Dreamhost even published a picture of a purported search warrant issued by the Superior Court of the District of Columbia.
The document allowed the department to ask for personal information, including the “names, addresses, telephone numbers and other identifiers, e-mail addresses, business information, the length of service (including start date), means and source of payment for services (including any credit card or bank account number), and information about any domain name registration.”
Dated July 12, the warrant also authorizes seizing any information on violations of DC laws governing riots, including the ones that took place as Trump was being sworn into the White House on January 20.
More than 200 Inauguration Day protesters arrested during the riots have been indicted for what prosecutors call causing violence.
If convicted, the protesters could face a maximum jail sentence of up to 10 years, and a fine of up to $25,000.
Since his inauguration, Trump has faced nearly non-stop protests and rallies condemning his divisive rhetoric and controversial immigration policy.