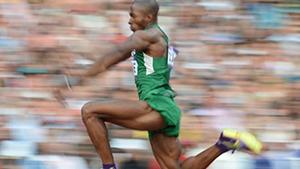 Some athletes, like Tosin Oke, feel the lack of medals reflects a lack of support from the Athletics Federation of Nigeria (AFN).
The triple jumper alleges discrimination and the holding back of training funds from the AFN.
He also feels let down by the IAAF, after complaining to athletics’ governing body about his concerns.

Who is Oke?
Oke, 36, is the reigning African champion in triple jump.
Having competed for Great Britain as a youngster – winning a European junior title – he switched to compete for his parents’ homeland after not being selected for the 2007 World Championships.
Since then, he has won three African titles: Two gold medals at the All Africa Games (the “African Olympics”) and another gold medal at the 2010 Commonwealth Games. At the 2012 Olympics, Oke was Nigeria’s best performing individual athlete – finishing seventh in the final.
Nonetheless, he says he has suffered repeated discrimination at the hands of Nigerian sports authorities, which he believes stems from his public criticisms of their work.

After winning at the 2015 All Africa Games (AAG), Oke wrote to the director-general of the National Sports Commission, the body then responsible for overseeing sport in Nigeria.
‘No victory lap, no Olympics’
In his email to Alhassan Yakmut, the athlete outlined the funds he desired to support an attempt to go for a field medal at the 2016 Olympics – a feat which no Nigerian man has ever achieved.
“Well received. Sorry your refusal to take a lap of honour at the AAG has ruled you out of Rio. Yakmut,” came the reply.
A baffled Oke duly sent through pictures of his victory lap but failed to win over Yakmut, who chastised him for looking “emotionless”.
Two weeks later, Oke learned that his name had not been put forward by Nigerian officials for an Olympic Solidarity Scholarship training grant provided by the International Olympic Committee (IOC).
“We do not know the criteria used by the IOC,” Solomon Ogba, then president of the AFN but now a board member, had told him in March 2015 when Oke had queried his absence.
“The selection was not done by us. What [we] did was send all the names to them,” added Ogba, a vice-president of Nigeria’s National Olympic Committee (NOC).
Concerned by the tone of Yakmut’s mail, Oke wrote to the IOC to ask why it had rejected his application.
“Your name was not included in the list of scholarship requests we received from your NOC,” came the IOC reply.
When contacted by the BBC about the discrepancy between their versions of events, Oke said:
“Athletes were asked to fill the forms which the NOC processed and sent to the IOC. Not all those – to the best of my knowledge – who filled the forms got the scholarship.”
Despite lacking training funds, Oke did make it to Rio – after buying an expensive flight to Brazil at late notice when the AFN told him the government had not released funds on time.
Told he would be refunded for his fare in Brazil, Oke realised this would not be the case upon arrival in Rio, so he spent the run-up to his event trying to secure his money, which equated to two months’ salary.
“At this point my mind was definitely not on competing, it was on ‘this is a huge amount’,” he said.
Unlike 2012, Oke failed to reach the final. He says he is still owed for a third of his flight fare. The government says all flight fares have been paid in full.

Oke says he has repeatedly failed to receive significant funds due to him from Nigerian officials – primarily for training grants.
Originating from the Nigerian government, the funds must pass through the AFN before reaching the athletes.
While saying he did receive some grants, Oke claims he was deprived of at least $146,500 (£112,923) more by the AFN between 2010 and 2015.
Image copyright Getty Images Image caption Tosin Oke won silver medals at the 2014 Commonwealth Games
Ogba rejects the allegations.
“The best thing is for him to petition the government who he claimed released money to the AFN,” he told BBC Sport.
“As a matter of fact, most of the monies he claimed to have received were my personal assistance to him and other athletes.”
When contacted by the BBC, the Nigerian government declined to comment on this matter.
IAAF response
In December 2015, Oke sent a 10-page statement to the IAAF in which he outlined his allegations of funds being withheld from athletes as well as other claims about lax doping controls and mismanagement – all of which he largely blamed on then-AFN president Ogba.
Ogba denies the allegations.
In his letter, Oke also hoped that its recipient – IAAF President Lord Coe – would find his “experiences serious enough to ask the right questions of the characters running the federation”.
The IAAF responded to Oke’s letter by sending a representative to meet the athlete, Chief Ogba and the AFN’s general secretary in March 2016.
“Having spent time with both Mr Oke and his federation [president and general secretary], the IAAF representative left reassured that the other issues canvassed by Mr Oke would be resolved between them,” Huw Roberts, the IAAF’s Legal Counsel, told BBC Sport.
The IAAF did not confirm whether or not its representative had brought up the denial of funds at the meeting.
Oke feels the IAAF effectively asked the AFN to investigate itself.
‘Lax’ doping controls
Oke had also told the IAAF how he had witnessed insufficient doping controls in Nigeria.
“This year [2015], I saw an athlete enter the doping room claiming to be another athlete,” he wrote. “As ID is not asked for/checked, anything is possible.”
The IAAF says that according to its representative, the issue was not raised in March 2016 when he met both Oke and Chief Ogba.
Oke maintains he did discuss wider concerns over doping in Nigeria with the representative, even if he did not directly address the matter above.
“The AFN, under my leadership, fought doping violations with every vigour we could muster,” Chief Ogba told BBC Sport.
Image copyright Reuters Image caption Nigeria’s athletes did not manage to win a medal at the 2017 World Championships held in London
Oke was not originally set to compete at the 2017 World Championships in London.
As an area champion, he was qualified to do so but the AFN did not put his name forward on time.
“It was the duty of your National Federation to submit your entry in due course,” the IAAF told Oke.
“At this late stage, with entry lists being already published, I am afraid there is nothing we can do.”
When the BBC asked the IAAF about Oke’s letter of 2015 and its various allegations, the initial response that came back two working days later largely dealt with the athlete’s selection issues with Nigeria.
It also revealed that the Nigerian had now been included in the World Championships – just six days before the event began.
The IAAF told Oke this was due to “exceptional” circumstances.
Oke, who says he had stopped training in the run-up since he was not expecting to be involved, finished in 25th place.
Despite his experiences, the athlete still hopes to compete for Nigeria at next year’s Commonwealth Games.
He is not the only athlete to be frustrated by the way in which Nigerian athletics is run, with several having switched nationality to compete for other countries in recent years.
Since the BBC wrote to the IAAF, the body’s Athletics Integrity Unit – which became operational in April – has invited Oke to re-submit his claims.