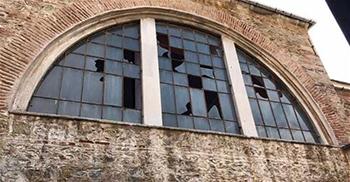 Kuzguncuk was a multicultural neighborhood in Istanbul’s Üsküdar up until the 1960s. The alleys are still full of old Rum houses and are home to two big Armenian churches, a GreekOrthodox church and several Jewish synagogues spread around the quarter. But the Surp Krikor Lusavoriç Armenian Church, on the main street by the Bosphorus, is having a hard time these days.

A touchstone in Kuzguncuk, the church dates back to 1835. But because of complaints filed to the Directorate General of Foundations it faces difficulty undergoing maintenance for its broken windows, caused by last month’s storm. The church’s main dome has an arch that was covered with small window panes. The hail and storm in Istanbul last month broke several glass windows and destroyed parts of the roof. Yet the church could not get the permission to repair them. Every time Turkish-Armenians living in the area want to repair the church or paint the exterior, they have to fight against complaints from the neighborhood.

“We have had several raids for inspection for no reason. Somebody complained that we were giving an unlawful religious feast right before Easter, which was under the supervision of priests. The Üsküdar Municipality has a right to hold iftars but we get punished if we serve food under our religious rules. The Directorate General of Foundations knocks on our door every time somebody complains for no reason. We hope they could help us repair our church,” one church source told the Hürriyet Daily News. He showed the HDN one aisle of the church could not be used because of the risk of broken glasses falling from the ceiling.

The Surp Krikor Lusavoriç Armenian Church is also running short of clergymen. “We have the right to have two weekly sermons,” a community leader told the HDN, “but unfortunately there are very few priests left because they go to Bakırköy or the Prince Islands for Sunday prayers. Here we cannot even open our doors for Sunday prayers.”

The church is located on the main seaside road between Üsküdar and Beylerbeyi, and is famous for sharing its wall with the neighboring Kuzguncuk mosque.