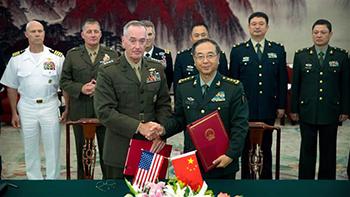 China and the United States have reached an agreement to improve their direct military communication to lower chances of “miscalculations” and accidental military confrontations amid the crisis on the Korean Peninsula.
The so-called Joint Strategic Dialogue Mechanism Agreement was signed in China’s capital of Beijing on Tuesday by US Chairman of the Joint Chiefs of Staff Marine Corps Gen. Joe Dunford and his Chinese counterpart Gen. Fang Fenghui.

The agreement is aimed at crisis mitigation and facilitating a “direct communication” channel between the two countries’ top military brass.
Fang said during the signing ceremony that the two military chiefs had discussed North Korea, Taiwan, and the South China Sea, adding that cooperation between the two militaries was the only correct choice for Washington and Beijing.
China’s Defense Ministry further said in a statement, “The Chinese military is willing to make efforts with the US side to strengthen strategic communication, increase strategic mutual trust, deepen practical cooperation, appropriately handle problems and disputes and effectively manage and control risks.”
Dunford said, “The military-to-military contacts between the United States and China are important because there will always be some friction between the two countries.”
But he also said that in the course of various meetings, he had come to the conclusion that the US and China “share one thing: we share a commitment to work through these difficulties.”
The top US general said military contacts between the two powers “will lessen the chances of a miscalculation.”
According to a Pentagon statement, the new accord offers hope that existing tensions between the two powers do not escalate into a military confrontation. It also envisions face-to-face dialog between the militaries, the first of which is set for next November.
“These communications are especially crucial now, as the region and the world are facing the dangers of a nuclear-armed North Korea,” the statement added.
Issues involving North Korea are among the many points of contention between China and the US. While the two countries share concerns about the North Korean missile and military nuclear programs, they sometimes differ on how to tackle the issue.