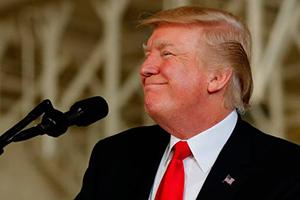 Nick O’Malley
In a rage-filled press conference Donald Trump has confirmed two bleak facts about his character and presidency. Firstly, that he does not signal to the so-called alt-right with his incendiary statements and his regurgitation of online conspiracy theories, he is in fact an alt-right president. Secondly, that he is utterly uncontrollable by the senior staff who rapidly cycle through his increasingly chaotic White House.

Trump appeared ostensibly to talk about plans to revitalise infrastructure, then offered to take questions.

This was, you might remember, the third time Trump addressed the deadly violence that accompanied a rally organised by and for white supremacists to protest against the removal of Confederate monuments on Saturday.

That day, before one of their number drove into a crowd of peaceful counter protesters, injuring 19 and killing a 32-year-old woman, Heather Heyer, the far right crowd was filmed beating people and chanting slogans such as “Jews will not replace us,” “Blood and soil,” and “heil Trump”.

Hours later Trump appeared in public to decry the violence “on both sides.” His failure to specifically denounce the overtly racist violence of the rally was quickly denounced on both sides of the political spectrum, including by many Republican members of Congress, who he will need to prosecute his blocked and failing agenda.

So on Monday, two days later, he had another go, appearing to give a meandering celebration of what he considers to be his economic successes, before tersely reading a statement denouncing the racist groups in Charlottesville and their violence.

It was apparently not a moment he enjoyed, because he could not resist revisiting it again in a press conference at Trump Tower the following day, when his staff had expected him to offer comments on infrastructure planning changes.

Instead he took questions, and in stark contrast to his address the previous day, he was angry, passionate and expansive. It was clear that this was the real Trump, expressing his own views with the odd clarity that made him such an effective political campaigner in an era when scripted politicians lack the authenticity many in their audience want to hear.

He argued that both sides had been guilty of violence, he noted that the white supremacists indeed had a permit to protest, but the “other group” did not. He insisted that both sides had “bad people” and “very fine people” and he drew an equivalency between George Washington, who help create the United States after the American Revolutionary War that ended in 1783, and General Robert E. Lee, who led the secessionist armies that killed more American troops than any other foe in the defence of slavery nearly a century later.

The political and media response afterwards was immediate and shocked. Again Republican leaders were forced to come out to rebuke and distance themselves from their ostensible leader. In a long Twitter statement Marco Rubio declared, “Mr President, you can’t allow #WhiteSupremacists to share only part of blame.They support idea which cost nation & world so much pain.”

As he spoke Trump’s new chief of staff, the former Marine general Mike Kelly, the man who many hoped would bring some discipline to the Trump White House was photographed by the New York Times on the fringes of the audience staring grimly at the crowd.

One White House staffer at the event glumly confessed to a CNN reporter, “That was all him – this wasn’t our plan”.

But not everyone was appalled. David Duke, the white nationalist and former Ku Klux Klan leader who had attended the Charlottesville rally and celebrated it as the “fulfillment” of Trump’s promises quickly responded.

“Thank you President Trump for your honesty & courage to tell the truth about #Charlottesville.”

Richard Spencer, the man who is considered to have coined the term “alt-right” and who headlined the Charlottesville rally, was also impressed.

“Really proud of him,” he told The Atlantic magazine via text. “He bucked the narrative of Alt-Right violence, and made a statement that is fair and down to earth.”