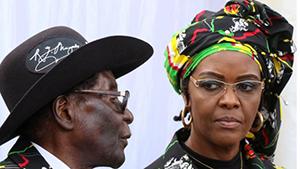 Zimbabwean First Lady Grace Mugabe has returned home from South Africa after failing to turn herself in to police in Johannesburg to face accusations of assault, officials say.

It was not immediately clear why Mrs Mugabe did not report to police after saying she would do.
A 20-year-old South African woman has accused Mrs Mugabe of hitting her over the head with an extension cord during a row at a hotel on Sunday evening.
Mrs Mugabe has so far not commented.
Zimbabwean government sources confirmed that Mrs Mugabe, wife of President Robert Mugabe, had returned home.
“Yes, she is back in the country. We don’t know where this issue of assault charges is coming from,” said one senior official quoted by Reuters.
Earlier, South African police said they had been negotiating with Mrs Mugabe’s lawyers to get her to hand herself in.
Confusion surrounded the case with officials saying at one point that Mrs Mugabe had handed herself over to police and would appear in court. She did not appear and police sources later said she had agreed to turn herself in but failed to do so.
Gabriella Engels, a model, accused Mrs Mugabe, 52, of hitting her after finding her with her two sons in a hotel room in Sandton, a wealthy suburb north of Johannesburg.
Ms Engels released an image of a head injury online.
“When Grace entered I had no idea who she was,” she told South African broadcaster News24.
“She walked in with an extension cord and just started beating me with it. She flipped and just kept beating me with the plug. Over and over. I had no idea what was going on. I was surprised. I needed to crawl out of the room before I could run away.
“There was blood everywhere,” she added. “Over my arms, in my hair, everywhere.”
She registered a “case of assault with intent to do grievous bodily harm”, police said.

Who is Grace Mugabe?
• Began affair with Robert Mugabe, 41 years her senior, while working as a typist in state house
• Mr Mugabe later said his first wife Sally, who was terminally ill at the time, knew and approved of the relationship
• Married Mr Mugabe, her second husband, in 1996 in an extravagant ceremony. They have three children
• Nicknamed “Gucci Grace” by her critics who accuse her of lavish spending
• Along with her husband, is subject to EU and US sanctions, including travel bans
• Praised by supporters for her charitable work and founding of an orphanage
• Received a PhD in September 2014, a month after being nominated to take over the leadership of the Zanu-PF women’s league