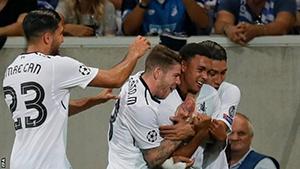 By Phil Dawkes-BBC Sport
Liverpool will take a one-goal advantage back to Anfield for the second leg of their Champions League play-off tie with Hoffenheim after Trent Alexander-Arnold’s free-kick and an own goal earned them a hard-fought victory in Germany.

Rookie full-back Alexander-Arnold demonstrated a cutting edge lacking in some of his more experienced team-mates with an expertly taken set-piece that found the bottom corner of the home net in the 35th minute to give him his first goal for the club.
James Milner took advantage of acres of space on the left to find the top corner via a significant deflection from the chest of Havard Nordtveit just 10 minutes after coming on as a second-half substitute.
But defensive frailties again hampered the Reds as Mark Uth was found by a long ball into the box and fired in largely unchallenged in the closing stages.
It could have been worse for Jurgen Klopp’s side. In just the 11th minute, Simon Mignolet had prevented European debutants Hoffenheim taking the lead with a neat save to push away Andrej Kramaric’s poor penalty after Dejan Lovren had upended Serge Gnabry in the box.
Having inflicted a first home defeat on Hoffenheim since the final day of the 2015-16 season, Liverpool will look to seal a return to the Champions League group stages for the first time since 2014 at Anfield next Wednesday.
Same pros and cons
Having picked the same starting XI that began the see-saw 3-3 draw at Watford in their opening Premier League fixture on Saturday, Liverpool played to type.
The Reds were superb going forward and should probably have scored more than twice, with Mohamed Salah and Roberto Firmino both failing to add goals to the ones they scored at the weekend.
Salah was sent running clear by Firmino’s pass in the first half but shot tamely past both keeper and post, while the Brazilian saw a close-range shot blocked by Oliver Baumann after being found by a low cross from the excellent Sadio Mane in the second.
But they will be left to rue familiar defensive frailties, which almost saw them concede an early lead when Lovren clumsily fouled ex-Arsenal winger Gnabry for the penalty and then gave the German side a lifeline in the tie when some lax marking gave Uth all the time he needed to score with three minutes to go.
Between then, Mignolet was required to pull off two good saves, firstly to deny Gnabry from close range and secondly to push away a Nadiem Amiri drive from just inside the box.
Look on the bright side

Liverpool have won the European Cup five times
The positives, though, outweigh the negatives for Klopp and his side.
In winning at the Rhein-Neckar-Arena they have achieved what no Bundesliga side – including Bayern Munich and Borussia Dortmund – was able to last season.
While clearly a stronger side with Philippe Coutinho in it, the Reds have shown over two matches that they can score goals without the Brazilian, who sat this game out with a back injury and remains on Barcelona’s wanted list.
In Alexander-Arnold they have a home-grown solution for a right-back position many assumed Klopp would have to fill at notable expense during this transfer window.
And in eight days’ time they will take to the field at Anfield as firm favourites to seal a lucrative spot in the group stage of Europe’s premier club competition.
Man of the match – Sadio Mane (Liverpool)

Alexander-Arnold scored the free-kick but Sadio Mane was the more consistent performer, providing a constant threat to the Hoffenheim defence whenever he had the ball
‘An OK result’
Liverpool boss Jurgen Klopp, speaking to BT Sport: “Hoffenheim had a specific plan to play. We gambled a little too much on the wing, it was a little dangerous in the first half, but as always when we play football, we found spaces in-between and created wonderful chances.
“The result is OK. The first half is done and if you said before the game we would win, I would take the result.
“We need Anfield, what an intense game for both sides. I am looking forward to a European night at Anfield. Only the person who does not know about Hoffenheim can be surprised by this.”
Hoffenheim coach Julian Nagelsmann: “We deserved to at least of had a draw.
“We were brave, but we were a bit too open in the second half and risked too much.
“The way the game went, with the missed penalty, was unfortunate for us.”
Reds remain unbeaten away in qualifying – The stats you need to know
• The Reds remain unbeaten in their nine away Champions League qualifying matches, with seven wins and two draws.
• Simon Mignolet’s early penalty save was his fourth from his last seven penalties faced in all competitions – in total he’s saved 35% of the penalties he’s faced since joining Liverpool (7/20).
• Trent Alexander-Arnold’s goal was his first for Liverpool, in his ninth start in all competitions.
• Liverpool scored more than once for the first time in their last nine European away games, since a 2-2 draw against Ludogorets Razgrad in the 2014-15 Champions League.
What next?
Liverpool play their first home Premier League game on Saturday, with Crystal Palace the visitors. The return leg against Hoffenheim is four days later.
The German side are at home against Werder Bremen on Saturday before the trip to Merseyside.