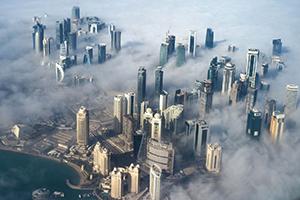 By Hannah Louise Abdoh
Saudi Arabia has long been an advocate of greater cooperation among the Arab monarchies bordering the Persian Gulf. It sees itself as the natural leader of those countries and their alliance as a means to form a united foreign policy that counters its chief rival, Iran. That helps explain why Saudi Arabia has led a group of countries to break diplomatic and commercial ties with Qatar, a nation pursuing an independent foreign policy that the kingdom and its allies say has threatened their security. Some regional analysts say that the crisis has torpedoed the goal of deeper cooperation in the oil-rich Gulf region.

1. How much do Gulf states cooperate now?
Six of them — Bahrain, Oman, United Arab Emirates, Kuwait, Qatar and Saudi Arabia — make up the Gulf Cooperation Council. It was formed in 1981 to counter the growing influence of Iran, which is populated mainly by Shiite Muslims while the GCC states are led by Sunnis. GCC members have adopted some of the features of the European Union’s single market. A customs union was announced in 2003 and fully established in 2015. Progress has been patchy toward a common market, announced in 2008 and meant to transform the Gulf peninsula into a single economic bloc, with businesses enjoying the same legal protections and citizens benefiting from equal opportunities for employment and social services as well as free movement across borders.
2. What about military cooperation?
The GCC founded a two-brigade Peninsula Shield Force in 1982 based in and commanded by Saudi Arabia and designed to respond to any external threats to members. Critics view the force as underdeveloped. In theory, GCC members are committed to a unified military command, but integration of their armed forces remains limited.
3. Has the GCC force ever been called into action?
Its only significant deployment was in Bahrain, at the government’s invitation, to suppress an Arab Spring uprising in 2011. Although Bahrain is led by Sunni royals, it has a Shiite majority, and the GCC justified its intervention with the argument that the revolt was instigated by Iran. Outside of the GCC framework, Saudi Arabia is leading a coalition of Arab countries in Yemen fighting Iran-linked Shiite rebels who ousted the Sunni president from the capital. GCC member Oman refused to join that effort, underscoring what is often a lack of agreement among the group’s members over who the enemy is. And Qatar’s role in the Yemen coalition ended after the Saudi-led boycott.
4. What further cooperation does Saudi Arabia want?
It has pushed for the GCC to become a “union within a single entity,” without defining what that would mean exactly, except to say that it would include a common currency, a plan that didn’t receive unanimous approval from the six members. The Saudis also for years have advocated for an “Arab NATO” — an idea that now appears to have support from the administration of U.S. President Donald Trump, which shares the kingdom’s hostility toward Iran.
5. How has the Qatar crisis affected Gulf unity?
Senior officials within the Saudi-led bloc say the rift was inevitable because of Qatari policies, a charge Doha denies. The crisis has created the most serious division within the GCC since it was established, splitting the group into two camps. Some analysts think the the GCC has been irreparably weakened. Only Bahrain and the U.A.E. have joined the Saudi-led boycott of Qatar. Kuwait has sought to mediate the conflict, and Oman has helped ease the boycott by allowing Qatari vessels to dock at its ports. Iran and another regional power, Turkey, have come to the aid of Qatar, sending in food and, in Turkey’s case, accelerating a pre-existing plan to deploy some troops there. In addition to chilling ties with Iran, the Saudi bloc wants Qatar to crack down on groups and individuals they consider terrorists.
6. What accounts for the GCC split?
In large part, differing positions on Iran and groups such as the Muslim Brotherhood, a regional Islamist organization supported by Qatar. The U.A.E. classifies the Brotherhood as a terrorist group. The alliance also wants Qatar to shut down the Doha-based Al Jazeera television. Qatar has rejected all the demands.
7. How does Saudi Arabia regard Iran?
As a rival for power in the Gulf and larger Middle East. After its Islamic Revolution in 1979, Iran saw itself as an agent of change in the region, much to the distaste of the Saudi royals. The competition between the two states intensified after the U.S. deposed Saddam Hussein in Iraq in 2003, and power there shifted from a Sunni-led government to one dominated by Shiites and friendly to Iran. Since then, Saudis and Iranians have faced off in proxy conflicts across the region, from Syria to Yemen.
8. How do Kuwait and Oman see Iran?
They’re more interested in coexisting peacefully with Iran. Oman faces Iran across the Strait of Hormuz, the world’s most important route for crude shipments. It has an agreement with Iran to build a $1 billion natural-gas pipeline connecting the two. Relations between Kuwait and Iran have recently been strained over legal proceedings involving terrorism allegations that Kuwait says involve Iran. But in general, Kuwait has sought to establish itself as a neutral country that works as a go-between, mediating disputes in the region.
The Reference Shelf
• Related QuickTakes on the Qatar crisis, Qatar’s ambitions, the Sunni-Shiite divide, and Saudi Arabia’s strains.
• A Council on Foreign Relations primer on the increasingly assertive Saudi foreign policy.
• Deutsche Welle examines the history of Saudi-Iranian relations.