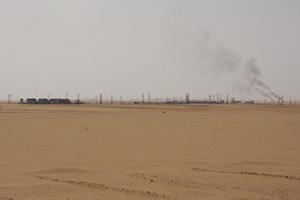 BENGHAZI, Libya (Reuters) – Production at Libya’s Sharara oilfield dropped to between 130,000 and 150,000 barrels per day (bpd), from about 280,000 bpd, because of recent security breaches, an engineer who works at the field said on Tuesday.

Field employees had difficulty accessing some of the field’s facilities after cars and mobile phones were stolen, said the engineer, who did not want to be named because he was not authorized to speak to the media.

It was not clear if production at Sharara had recovered since the security problems, which occurred several days ago.

On Monday, the National Oil Corporation (NOC) said security breaches in recent days were the result of an individual act, that the perpetrator had been punished and that the field was safe and secure.

It gave no information about any impact on production, and NOC officials did not respond to requests for comment on output at the field.

Sharara’s production is key to a revival of Libya’s oil output, which surged to above one million bpd in late June, about four times higher than its level last summer.

Protests by armed groups and workers have imposed several temporary or partial shutdowns on Sharara since a two-year pipeline blockade was lifted, which allowed the field to reopen in December.

In recent days workers at Zueitina export terminal had threatened to block oil tankers from docking because of demands including the payment of delayed wages.

On Tuesday a union head for the port workers, Marae Abridan, said the workers would allow three weeks for their demands to be addressed, and that tankers would be allowed to dock.

A tanker docked at Zueitina on Tuesday to load 370,000 barrels of crude, Abridan said.

Also on Tuesday, a government based in eastern Libya said it was replacing Naji al-Moghrabi, the head of a parallel branch of the NOC in Benghazi who has frequently issued strident statements over oil production.

Since 2014 Libya has had competing governments based in Tripoli and the east, and eastern factions have tried to export oil independently, using Moghrabi’s NOC.

However, the attempts have been blocked under U.N. Security Council resolutions, and armed forces aligned with the eastern government have allowed the NOC Tripoli to operate in areas under their control.

Moghrabi was replaced by Faraj Mohamed Saeed, a former boss at NOC subsidiary AGOCO, according to a government statement.