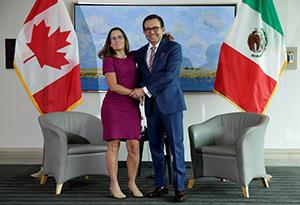 Lesley Wroughton and David Ljunggren
WASHINGTON (Reuters) – Negotiators from Canada, Mexico and the United States are aiming for an “ambitious” first round of trade talks, a senior U.S. official said on Tuesday, as the countries try to fast-track a deal to modernize the 23-year-old pact by early next year.
The United States Trade Representative official, speaking on a conference call with reporters, said the sides would begin to merge proposed texts during the first round of meetings in Washington.

The talks start on Wednesday led by U.S. Trade Representative Robert Lighthizer, Canadian Foreign Minister Chrystia Freeland and Mexican Economy Minister Ildefonso Guajardo.
“We are actually going to be quite ambitious in this first round,” the USTR official said, without elaborating on specifics on any of the proposals.
The official, speaking on condition of anonymity, said the aim of the United States was to get a “more balanced, reciprocal trade agreement that supports high-paying jobs for Americans and grows the U.S. economy.”
The talks follow threats by U.S. President Donald Trump during his presidential campaign to ditch the 1994 NAFTA agreement, which he said had hurt U.S. manufacturing and drained jobs to low-wage Mexico. Trump said later he had been convinced by Canada and Mexico to renegotiate the pact.
While U.S. administration officials have said there is no firm deadline to reach an agreement, Mexico is pushing for the sides to reach an agreement before its presidential campaign begins in earnest in February.
Speaking on the eve of the talks before a meeting with Guajardo at the Canadian embassy in Washington, Freeland said she looked forward to a “productive, constructive conversation” on Wednesday.
Guajardo struck a cautious note about the talks. ‎”I have always said a negotiator cannot be an optimist. He has to be a realist with a positive approach,” he told reporters.
Trucks wait in the queue for border customs control to cross into U.S. at the Bridge of Americas in Ciudad Juarez, Mexico, August 15, 2017.Jose Luis Gonzalez
In a statement, U.S. Senator John McCain cautioned the Trump administration not to impose “new barriers that could harm our ability to trade with our closest neighbors.”
“I urge the administration to pursue an outcome that does not pick winners or losers, but further promotes the free flow of trade with Mexico and Canada that has and will continue to boost our economy,” said McCain, a Republican from Arizona.
The United States has said its top objective for the talks is shrinking the $64 billion U.S. goods trade deficit with Mexico, as well as a much smaller $11 billion deficit with Canada.
It also wants to deter currency manipulation by trading partners, strengthen NAFTA rules of origin, and eliminate a trade dispute mechanism under so-called Chapter 19, which Canada wants to keep in the agreement.
Freeland suggested on Monday that Canada could walk away from the talks if Washington insisted on scrapping the mechanism to resolve trade disputes between the three NAFTA countries.
Canadian Prime Minister Justin Trudeau is considering a trip to Mexico in October in the midst of the talks, his office said.
The USTR official said alterations to NAFTA’s rules of origin to ensure tariff-free benefits go to member states were a key objective of the talks. But he did not say whether the United States would seek U.S.-specific content rules or to increase the local content requirements for North American-produced cars and trucks.
Auto industry executives are opposed to the U.S. negotiating objectives to tighten the rules of origin, especially for vehicle parts.
“In terms of the rules of origin, the overall goal is to address concerns about doing more to incentivize and create more manufacturing and more manufacturing jobs in the United States,” said the official. “I think each country expects benefits for itself from those rules of origin, and I think that’s what you’re seeing reflected in our objective statement.”
Additional reporting by David Lawder; Editing by Jeffrey Benkoe and Tom Brown