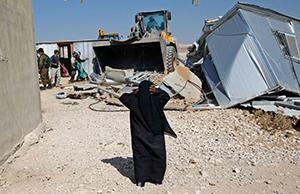 Tearing down terrorists’ homes is a controversial deterrence tactic with a long history.
by Daniel Gordis