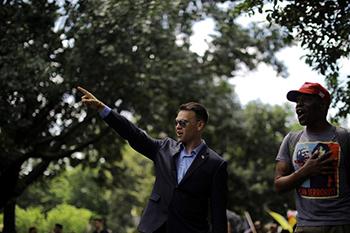 In the wake of Charlottesville and a resurgence of white supremacy, tech companies’ complex political positioning is getting harder to maintain.
Jack Posobiec, an alt-right figure who was retweeted by Donald Trump this week, attends a rally outside of the White House Carlos Barria / Reuters

Both as a service and a company, Google has always been a convenient stand-in for the greater internet. “Googling” became shorthand for searching for something on the web. The “don’t be evil” line from its IPO prospectus became a catch-all politics for Silicon Valley.
So it’s not surprising that the outbreak of a new strain of reactionary politics has found its way to Google’s doorstep. First, Google fired the engineer James Damore for writing a memo explicitly opposing the company’s diversity and inclusion policies through a specious reading of the biology literature on gender and IQ differences in humans. Damore became an instant celebrity on the right and among free-speech absolutists.
Then, so-called “New Right” figure and noted conspiracy theorist Jack Posobiec—who President Trump retweeted this week—called for a march on Google offices in cities across the country for this Saturday, August 19. “Google is a monopoly, and its [sic] abusing its power to silence dissent and manipulate election results,” the announcement reads. “Their company YouTube is censoring and silencing dissenting voices by creating ‘ghettos’ for videos questioning the dominant narrative. We will thus be Marching on Google!”
This week, too, the Daily Stormer, a long-running neo-Nazi site, got cut off from its original hosting and went to Google, who also cut off the site.
Looking at this news in isolation, you might say: Google has become a right-wing target because it is a liberal institution. Certainly, it has not gone unnoticed on the right that Googlers overwhelmingly supported Hillary Clinton, both financially and operationally. And more generally, the Bay Area technology industry has become a key base of support for Democratic candidates.
By moving our speech online, we entered a mall, where Facebook or Twitter or Google control the rules, not the U.S. government.
But the ideology underpinning Silicon Valley does not fall on a strict left/right spectrum. For many years, scholars who study the internet’s dynamics have been saying that the public sphere—the place where civic society is supposed to play out, the place “free speech” advocates desire to see preserved—has been privatized by Facebook, Google, and the other big internet companies. Most on the left saw this privatization as part of a larger conservative (or—GASP—neoliberal) movement that was sapping the strength of the government-secured commons.
Zeynep Tufekci, a sociologist at Princeton University, made this connection in 2010. “This is about the fact that increasing portions of our sociality are now conducted in privately owned spaces. The implications of this are still playing out,” she wrote.
She cited a litany of examples running long before Google and Facebook: the outsourcing of key government functions to private contractors, the “dominance of corporate-owned media over the civic public sphere,” and the replacement of public parks with malls and “privately owned town squares.”
By moving our speech online, we entered a mall, where Facebook or Twitter or Google control the rules, not the U.S. government. Companies have different imperatives, the first of which is—for these companies, above all—to make money on advertising. By and large, this has led to a maximally permissive informational environment. On the occasions they have intervened to censor nipples or ban particular kinds of sites, their response has been: Hey, it’s a free market and you can always post photos to your LiveJournal, search with Bing, and chat on Gab.
These attitudes are why sometimes people describe Silicon Valley as “libertarian.” But most Silicon Valley people are wealthy Democrats who support progressive social causes, but do not want entrepreneurship and business restrained by the government (too much). They are the classic “socially liberal, fiscally conservative” people who the left (dirtbag and otherwise) loves to pillory.
If people don’t like Google’s or Facebook’s decisions, they can head for the digital exits.
Take the Los Angeles–based web host and domain-name registrar DreamHost, for example. On the one hand, they are fighting the Department of Justice, which has requested details on 1.3 million visitors to an anti-Trump website. “That information could be used to identify any individuals who used this site to exercise and express political speech protected under the Constitution’s First Amendment,” the company wrote on its blog. On the other, they are part of the cloud infrastructure of neo-Nazi groups like the American Nazi Party.
All of which puts both left-wing critics and right-wing marchers into different kinds of binds.
For the right, Google and Facebook are private actors who obey the market. Last I checked, strong-arming companies into doing the will of the people by extra-market means is not high on the list of conservative principles. Why can’t the market just decide? If people don’t like Google’s or Facebook’s decisions, they can head for the digital exits.
And on the left, Google and Facebook and the rest are, in fact, manifestations of neoliberalism. But because they’ve privatized the public sphere of discourse, they now possess the power to shut down white-supremacist sites, stop Daily Stormer links from circulating, and do it all without anyone having a legal or constitutional basis for stopping the “censorship.” The biggest de-platforming of all would come from getting the internet platforms themselves to use their power to stop the speech of white supremacists, neo-Nazis, birthers, “ironic racist” 4channers, and anti-Semites. And, indeed, a message projected onto Twitter headquarters this week called for just such a move:
In #Charlottesville, Nazis are marching, many with Twitter accounts. At #twitter HQ, I’m asking a simple question. pic.twitter.com/v3gkoaKU8B
— ÆMarling (@AEMarling) August 12, 2017
As more and more of daily life online is consumed by the political storm in America, the “socially liberal, fiscally conservative” position that the tech companies have staked out is getting harder and harder to hold.