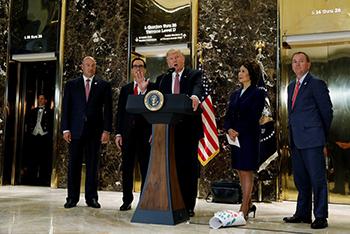 The president backtracked from his remarks on Charlottesville just a day earlier.
Kevin Lamarque / Reuters
Subscribe to The Atlantic’s Politics & Policy Daily, a roundup of ideas and events in American politics.
President Trump defended the white nationalists who protested in Charlottesville on Tuesday, saying they included “some very fine people,” while expressing sympathy for their demonstration against the removal of a statue of Confederate General Robert E. Lee. It was a strikingly different message from the prepared statement he had delivered on Monday, and a reversion to his initial response over the weekend.

Speaking in the lobby of Trump Tower at what had been billed as a statement on infrastructure, a combative Trump defended his slowness to condemn white nationalists and neo-Nazis after the melee in central Virginia, which ended in the death of one woman and injuries to dozens of others, and compared the tearing down of Confederate monuments to the hypothetical removal of monuments to the Founding Fathers. He also said that counter-protesters deserve an equal amount of blame for the violence.
“What about the alt-left that came charging at, as you say, at the alt-right?” Trump said. “Do they have any semblance of guilt?”
“I’ve condemned neo-Nazis. I’ve condemned many different groups. But not all of those people were neo-Nazis, believe me,” he said.
“You had many people in that group other than neo-Nazis and white nationalists,” Trump said. “The press has treated them absolutely unfairly.”
“You also had some very fine people on both sides,” he said.
The “Unite the Right” rally that sparked the violence in Charlottesville featured several leading names in the white-nationalist alt-right movement, and also attracted people displaying Nazi symbols. As they walked down the street, the white-nationalist protesters chanted “blood and soil,” the English translation of a Nazi slogan. One of the men seen marching with the fascist group American Vanguard, James A. Fields, is charged with deliberately ramming a car into a crowd of counter-protesters, killing 32-year-old counter-protester Heather Heyer.
Trump on Tuesday made an explicit comparison between Confederate generals and Founding Fathers such as George Washington and Thomas Jefferson. “Many of those people were there to protest the taking down of the statue of Robert E. Lee,” Trump said. “This week, it is Robert E. Lee. And I notice that Stonewall Jackson is coming down. I wonder, is it George Washington next? And is it Thomas Jefferson the week after? You know, you have to ask yourself, where does it stop?”
The substance of Trump’s unscripted remarks hewed more closely to his initial reaction to Charlottesville on Saturday, when he blamed “many sides” for what happened. On Monday, after two days of relentless criticism, Trump gave a stronger statement, saying “racism is evil” and specifically condemning white supremacists, the Ku Klux Klan, and neo-Nazis. Speaking to reporters shortly afterward, white nationalist Richard Spencer told reporters he didn’t see Trump’s remarks as a condemnation of his movement.
Tuesday’s appearance made it even clearer that those words had been forced on the president. Throughout his campaign, he was reluctant to disavow the white nationalists who have formed a vocal segment of his supporters. Asked if he had spoken to Heyer’s family in the days since her death, Trump said “we will be reaching out.”
Trump also addressed swirling rumors about the status of his chief strategist, Steve Bannon, who has come in for another round of speculation this week that his job may be in danger. Trump is reportedly angry about the recent book Devil’s Bargain, by the Bloomberg Businessweek writer Joshua Green, which portrays Bannon as the key reason for Trump’s election victory.
The president defended Bannon as having been unfairly attacked as a racist in the press, but declined to say if he still has confidence in him.
“I like Mr. Bannon, he is a friend of mine,” Trump said. “But Mr. Bannon came on very late. You know that. I went through 17 senators, governors, and I won all the primaries. Mr. Bannon came on very much later than that. I like him. He is a good man. He is not a racist, I can tell you that. He is a good person. He actually gets very unfair press in that regard. We’ll see what happens with Mr. Bannon. But he is a good person, and I think the press treats him, frankly, very unfairly.”
The remarks echo what Trump told the New York Post earlier this year during a similar moment of uncertainty about Bannon’s position. “I like Steve, but you have to remember he was not involved in my campaign until very late,” Trump told the Post in April.