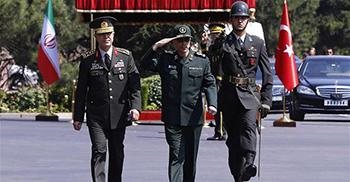 Iran’s Chief of General Staff Maj. Gen. Mohamed Baqeri kicked off his three-day Turkey visit on Aug. 15 with a meeting with his Turkish counterpart Gen. Hulusi Akar, with the security situation in the region dominating the agenda.

A planned independence referendum by the Kurdistan Regional Government (KRG) in northern Iraq was among the top items of the talks between the two military delegations.

The sides agreed that the KRG’s insistence on holding a referendum and a result of independence at the vote would have negative effects on the territorial integrity of both countries.

Iran and Turkey have loudly voiced their opposition to the idea of holding the referendum at such a sensitive time in the region, warning the KRG leadership that the move would be a “grave mistake with serious consequences.”

During the meeting, the sides agreed to increase the current cooperation on border security regarding the fight against the outlawed Kurdistan Workers’ Party (PKK).

Baqeri’s visit comes only a week after Turkey started building a wall along its border with Iran with the objective of improving security, halting the infiltration of PKK militants and illegal smugglers.

The Turkish authorities announced the construction of a 144-kilometer barrier in May as a means of blocking cross-border movements. The entire Turkish-Iranian frontier is around 500 kilometers long.

On the Syrian issue, the talks focused on the de-escalation zones mechanism which was earlier agreed upon and the contribution of the countries to the mechanism. Ankara and Tehran have no agreement on the checkpoints to be established inside Syria to ease the access of humanitarian aid and the return of Syrians to their lands. Turkey has not approved seven planned checkpoints over concerns that they could increase Iran’s area of influence in Syria.

“No major military force will be sent for the checkpoints. Small groups such as teams and squads may resume responsibility,” said an official on conditions of anonymity.

The Iraqi army’s operation on Tal Afar, held by the Islamic State of Iraq and the Levant (ISIL) was also on the agenda. The Turkish side noted its sensitivity on the participation of Shiite militia in the ground operation.