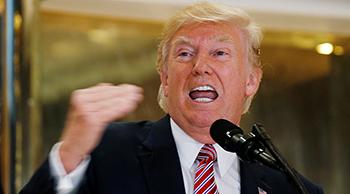 During a combative news conference, President Donald Trump asked if the “alt left” had “any semblance of guilt” for the deadly protest violence in Charlottesville, what he called “a horrible moment for our country.”
Alt-Left counter-protesters “swinging clubs” also to blame for Charlottesville violence – Trump pic.twitter.com/98CmtqX4rq

— RT America (@RT_America) August 15, 2017
Trump has seemingly yet to recover from widespread criticism on his initial comments Saturday, after a woman was killed in Charlottesville, Virginia, while counter-protesting an alt-right march attended by white supremacists and white nationalists. At the time, the president condemned violence from “many sides,” and amid a backlash Monday, he specifically called out neo-Nazis.
On Tuesday, during a heated news conference at Trump Tower in Manhattan that was meant to focus on infrastructure, Trump spent most of the time critiquing reporters who asked why it took him so long to issue a stronger statement.
One reporter asked Trump if he thought the press was treating white nationalists unfairly.
“No, no,” Trump responded. “There were people in that rally, and I looked the night before. if you look, there were people protesting very quietly, the taking down of the statue of Robert E. Lee. I’m sure in that group there were some bad ones. The following day, it looked like they had some rough, bad people, neo-Nazis, white nationalists, whatever you want to call them.”
“But you had a lot of people in that group that were there to innocently protest,” Trump continued, “and very legally protest, because I don’t know if you know, they had a permit. The other group didn’t have a permit.”
Trump said there were “two sides to a story” before asking,
“What about the alt-left that came charging at the, as you say, the alt-right? Do they have any semblance of guilt?”
“Let me ask you this, what about the fact they came charging with clubs in the hand, swinging clubs? Do they have any problem? I think they do,” he said.
“You had a group on one side that was bad, and you had a group on the other side that was also very violent. And nobody wants to say that, but I’ll say it right now.”
The fiery exchanges with the press pushed “Alt Left” near the top of trending topics on Twitter. Many were bewildered, denying the term represented anything real at all.
I just want to clarify this for this moron @realDonaldTrump, and for anyone else. THERE IS NO ALT-LEFT. Thats not a thing.
— Mike Wereski (@bigwersk) August 15, 2017
Trump is siding w/ white supremacists, blames “Alt Left” for violence and downplaying death of young women in C-ville. GOP MUST impeach him.
— Ted Rall (@TedRall) August 15, 2017
Former Green Party presidential candidate Dr. Jill Stein said the term was devised to fool others into believing that “people who support human rights for all are morally equivalent to Nazis.”
Anyone using the term “Alt-Left” wants you to believe people who support human rights for all are morally equivalent to Nazis.
— Dr. Jill Stein? (@DrJillStein) August 15, 2017
Others on Twitter pointed to some on the political left for coining the term as an epithet for some progressives in the broader liberal movement.
Presumably the idiots who worked so furiously to coin “alt left” in order to disparage everyone left of Hillary can declare victory now.
— Michael Tracey (@mtracey) August 15, 2017
Hmmm pic.twitter.com/O8PUYmTvWh
— Rania Khalek (@RaniaKhalek) August 15, 2017
Trump today sounded a lot like the President of the Center for American Progress https://t.co/Yz32Cfa66Y
— Max Blumenthal (@MaxBlumenthal) August 15, 2017
whodathunk constantly equating socialists/antifa w/ nazis w/ “alt left” term for over yr wld provide cover for nazi apologist Donald Trump
— Adam H. Johnson (@adamjohnsonNYC) August 15, 2017
Trump predictably drew many attacks on social media. Some of the praise, however, may have been the least helpful.
Former KKK Grand Wizard David Duke thanked Trump “for your honesty & courage to tell the truth about #Charlottesville & condemn the leftist terrorists in BLM/Antifa,” he said on Twitter. Duke had previously called out Trump’s perceived feebleness, saying, “It’s amazing to see how the media is able to bully” him.
Thank you President Trump for your honesty & courage to tell the truth about #Charlottesville & condemn the leftist terrorists in BLM/Antifa https://t.co/tTESdV4LP0
— David Duke (@DrDavidDuke) August 15, 2017
Democratic officials in Virginia on the local and federal levels also took aim at Trump for his comments Tuesday.
Rep. Don Breyer said Trump “won’t desert the white supremacists. Just incredible.”
And now we’re back to where we were Saturday: “there’s blame on both sides.”

He’s literally using the SAME language that the supremacists use…