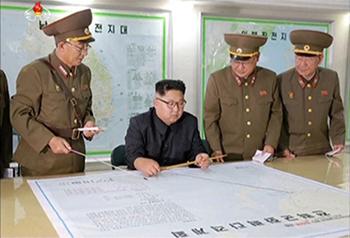 Signs of a conflict with the U.S. may have been overblown.
North Korean leader Kim Jong Un reviews the plan for firing missiles near Guam. KRT / Reuters Krishnadev Calamur
North Korea’s apparent walk back of its threat to fire missiles near the U.S. territory of Guam could mean military tensions with the United States have been diminished—or at least postponed.