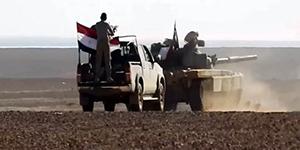 Provinces, SANA -Army units, in cooperation with backup forces, established control over a number of strategic hills in the eastern countryside of Salamiyeh in Hama province.

A military source told SANA that army units, in cooperation with backup forces, continued their combat operations against ISIS terrorist organization in the eastern countryside of Salamiyeh and established control over a number of strategic hills in the area surrounding Salba village.
The source added that a number of ISIS terrorists were killed and their weapons and equipment were destroyed during the army’s operations.
Deir Ezzor
Army and Armed Forces units, backed by the Syrian Air Force, carried out on Wednesday operations against gatherings and movements of ISIS terrorists in Deir Ezzor, killing many of them, including Saudi and Kuwaiti terrorist.
SANA’s correspondent in Deir Ezzor said that the army units clashed with ISIS terrorists on the axes of al-Hweiqeh, al-Rishdieh, and the surroundings of the Airport, which resulted in killing and injuring many of the terrorists and destroying a large amount of weapons and munitions that was in their possessions.
The reporter added that the Syrian Air Force conducted intensive airstrikes on sites and supply routes of ISIS terrorists in the areas of al-Panorma and al-Mawared, the neighborhoods of al-Rishdieh, al-Hweiqeh, Khasarat, and the villages of al-Hussenieh, al-Bougheilieh, Hatleh, Hweijet Saker, Aiyash, and al-Masrab.
The airstrikes resulted in destroying several ISIS sites and killing many of them, including Kuwaiti terrorists Aweid al-Barak and Aeid al-Dakheil, Saudi terrorist “Abu Aisha al-Jazrawi,” and Malaysian terrorist “Abu Mariam.”
In another context, civil sources in the western countryside of Deir Ezzor confirmed that an ISIS group fled the area, adding that the group included an ISIS leader nicknamed “Gliebib the Tunisian” and “Abu Talha the Belgian” who escaped with a sum of SYP 39 million that was in his possession.
Raqqa
Meanwhile, Units of army advanced 25 km into the depth of Raqqa southern countryside and established control over Tal al-Asfar, Douhour al-Mamlaha, Rasm al-Umali, Rajm al-Sheih and a number of strategic hill on the road of Athrya in Hama eastern countryside.