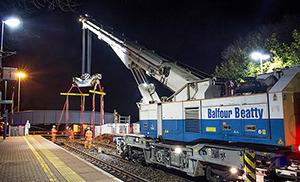 Reuters
LONDON: Balfour Beatty is focusing on winning British infrastructure contracts, its CEO said, as the group posted an almost 70 percent rise in half-year profit and said a two-year overhaul had restored its British construction unit to profit.

The turnaround at the British construction group propelled its shares to the top of the Stoxx index with a rise of 7 percent by 9:17 a.m. GMT.
Chief Executive Leo Quinn said Brexit uncer- tainty had led to a slowdown in the London con- struction market, but the shortfall had been more than offset by public infrastructure work in areas such as highway and rail.
“That’s actually a welcome balance. We’re looking at anything that is primary infrastruc- ture. Having the largest share in the UK at this point on a rising tide is a good place to be in,” Quinn told Reuters.
Balfour has spent two years overhauling opera-
tions after losses at its British construction divi- sion led to multiple profit warnings. It scrapped its 2015 dividend, canceled a share buyback and reorganized pension payments. The group started pulling out of the Middle East, Indonesia and Australia in 2015 and in February this year said it was selling its share in Dutco Balfour Beatty and BK Gulf, subject to regulatory approval, for £11 million ($14 million).
The group said on Wednesday its order book was down 8 percent at £11.4 billion ($14.70 bil- lion) as it bid more selectively for profitable contracts, but it said it expected to reach indus- try-standard margins in the second half of next year.
Balfour, which won two contracts this year for Britain’s High Speed 2 railway project, said pre- tax profit from continuing operations grew to £22 million in the six months to June 30, up from £13 million a year ago.
Its British construction unit posted a profit of £2 million compared with a loss of £69 million last year, prompting the group to declare an interim dividend of 1.2 pence, up 33 percent on a
year ago.
“While the strategy is sensible and progress is
being made, there’s still some way to go before Balfour is in rude health … When it’s all over, Balfour could prove a nice little earner for inves- tors,” said Nicholas Hyett, equity analyst at Hargreaves Lansdown.
Quinn forecast that there would be more pub- lic work on offer this year than construction firms could take up, adding that Balfour was hoping to work on more projects for existing customers such as Highways England, the planned new nuclear power station at Hinkley Point, Heathrow and HS2.
The company’s buoyant outlook contrasts with its closest peer Carillion, which booked a £845 million writedown and issued a profit warning earlier this year. Carillion is Balfour’s joint ven- ture partner on two projects.
“We’ve not had any strategic discussions around Carillion per se. It’s really around the job and delivering for the customer … They’re meet- ing all their obligations as a partner,” Quinn said.
̶ REUTERS