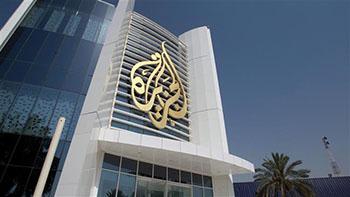 Tel Aviv is set to revoke the press credentials of an Al Jazeera journalist over his positions in favor of Palestinian resistance amid the regime’s efforts to close the office of Qatar’s pan-Arab broadcaster in the occupied territories.
According to Israeli media, Israel’s Press Office said on Wednesday that it stripped Elias Karram, Al Jazeera’s correspondent in East Jerusalem al-Quds, of his press card, pending a hearing, after reviewing a 2016 interview, in which the Arab Israeli reporter voiced support for media activities in favor of the resistance movement.

“As a Palestinian journalist in an occupied area or in a conflict zone, media work is an integral part of the resistance and its educational political activity,” Karram had said in the 2016 interview.
“The journalist fulfills his role in the opposition with the pen, voice or camera, because he is part of this people and he carries out resistance in his unique way,” he had stated.
In a statement, Israel’s Press Office said, “These remarks call into question the ability of Karram, the representative of a foreign network, to cover – as a professional journalist – the Israeli-Palestinian conflict in which, according to his own words, he is taking an active part.”
The statement noted that Israeli Communications Minister Ayoob Kara recently requested that “the press cards of Al Jazeera personnel in Israel be revoked on the grounds that the network was inciting and agitating to violence” in a way that harmed Israel’s security.
The Press Office plans to hold a hearing for Karram in order for the journalist to provide explanations for his comments and clarify how his positions in support of Palestinian resistance impact “his work as a journalist according to universal ethics.”
Al Jazeera has declined to immediately comment on the revocation of Karrem’s press card.
The Union of Journalists in Israel denounced the planned move as “intolerable.”
The planned move “is not only an attack on Elias Karrem but an attack on the principles of freedom of expression and freedom of press and the ability of reporters to faithfully serve the public,” the union said in a statement.
Following the deadly conflicts caused by Israel’s restrictions on Al-Aqsa mosque in July, Israeli Prime Minister Benjamin Netanyahu accused Al Jazeera of inciting violence, saying he seeks to expel the broadcaster from the occupied territories.
Al Jazeera condemned Netanyahu’s remarks as “arbitrary accusations and hostile statements,” stressing that the broadcaster would “take all necessary legal measures in case they act on their threat.”
On August 6, the Israeli communications minister reiterated Netanyahu’s positions, threatening to shut down Al Jazeera’s offices in Israel.
The Amnesty International condemned the Israeli minister’s remarks as a “brazen attack on media freedom.”
In July, Al Jazeera said Israel was aligning itself with Saudi Arabia, the United Arab Emirates, Egypt and Bahrain that have severed diplomatic and commercial relations with Qatar.
Jordan and Saudi Arabia have shut down Al-Jazeera’s bureaus, while the channel and its affiliate sites have been blocked in the United Arab Emirates, Egypt and Bahrain.
The closure of Al Jazeera is one of the 13 demands put forward by the four countries to normalize ties with Qatar, which have been rejected by Doha as an attack on its sovereignty.
Most Arab governments have no diplomatic relations with Israel. Even so, reports have indicated that several of them, including Saudi Arabia, have had secret relations with Tel Aviv.