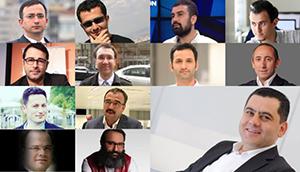 By TM
Journalists who appeared before a judge on Wednesday at the İstanbul 25th High Criminal Court denied accusations of taking part in or supporting a coup attempt in Turkey last year and asked to be released.

Thirteen journalists who are charged with participation in the coup are currently standing trial.
Cihan Acar, who asked the court for a fair trial and for his release, said his conversations with 18 people were found suspicious. “Seven of these people are journalists, five of them are lawyers and five of them are the lawyers of the newspaper for which I used to work,” said Acar.
Arguing that the investigation into coup participation had zero evidence when they were arrested, Acar revealed the names of alleged ByLock users he spoke with on the phone.
He said he only communicated with them for the purpose of collecting data as he was writing news reports.
ByLock is a mobile phone application seen as the top communication tool among members of the Gülen movement, accused by the Turkish government of masterminding the coup attempt.
Another journalist, Abdullah Kılıç, argued he had an account at Bank Asya, a closed bank affiliated with the Gülen movement, in order to pay his daughter’s tuition and to receive his salary from the Meydan daily. Kılıç, who was also accused of talking to people with ByLock on the phone, said he is a journalist and that he also talked to the prime minister at night.
“There are more than 1,000 politicians and journalists in my address book. Ninety percent of suspected conversations happened before 2013. There was no ByLock at that time,” said Kılıç.
Kılıç said the fact that he worked for the Meydan daily for 11 months was written in the indictment as if it were a crime. Reading the tweets he posted on the night of the coup attempt, Kılıç claimed he had been against the coup from the beginning.
Denying claims about being the owner of the Türk Solu daily, Gökçe Fırat Çulhaoğlu said he was the lead writer for the newspaper, the distribution of which was not illegal, unlike what the indictment said, but that none of the distribution companies wanted to distribute it.
Displaying headlines and news reports from the daily, Çulhaoğlu said he and his paper have always been against the Gülen movement.
Bünyamin Köseli said he was working on opening an antique store after he had been left unemployed and was trying to collect documents on July 15.
“Would someone who knows about a coup attempt in the evening be keeping himself busy with such things? Am I contributing to the coup by trying to open an antique store while some people are planning the coup?” asked Köseli.
Denying claims about having a credit card from Bank Asya, Köseli said he hadn’t used any credit cards in the last 10 years.
Journalists who were accused of membership in the faith-based Gülen movement in another investigation into Gülen-affiliated media were acquitted after the first hearing yet were detained again before their release due to another investigation into coup participation.
The prosecutor and the judges who released the journalists were dismissed.
Of the 13 journalists, Ali Akkuş was released after being detained and the other 12 journalists were arrested after a two-week period of detention.
An indictment drafted by the İstanbul Chief Public Prosecutor’s Office that sought two consecutive life sentences for the 13 journalists on coup charges was accepted by the 25th High Criminal Court in İstanbul.
The indictment revealed that the suspects are accused of membership in a terrorist organization due to their stories, critical tweets and retweets and of attempting to destroy the constitutional order and attempting to overthrow the government of the Republic of Turkey.
The journalists named in the indictment are National Party (UP) leader and Türk Solu weekly columnist Gökçe Fırat Çulhaoğlu, Yakup Çetin, Bünyamin Köseli, Cihan Acar, Abdullah Kılıç, Oğuz Usluer, Hüseyin Aydın, Murat Aksoy, Mustafa Erkan, Seyit Kılıç, Yetkin Yıldız, Ali Akkuş and pop singer and journalist Atilla Taş.
Turkey is ranked 155th out of 180 countries in Reporters Without Borders (RSF) 2017 World Press Freedom Index. The situation of media in Turkey has become critical under the state of emergency proclaimed after the coup attempt.
According to the Turkey Purge website, based on information compiled from PEN International, the Platform for Independent Journalism (P24), the Stockholm Center for Freedom (SCF), the Journalists’ Union of Turkey (TGS) and the Progressive Journalists Association (ÇGD), 274 journalists were jailed in Turkey following a failed coup last year.
While 163 of them are still in pretrial detention, the others were released pending trial or were cleared of charges.
Turkey’s Contemporary Journalists’ Association (ÇGD) recently announced that more than 900 press cards were cancelled.
Turkey survived a coup attempt on July 15, 2016 that killed 249 people and wounded more than a thousand others. Immediately after the putsch the ruling Justice and Development Party (AKP) government along with President Tayyip Erdoğan pinned the blame on the Gülen movement.
Fethullah Gülen, who inspired the movement, strongly denied having any role in the failed coup and called for an international investigation into it, but President Erdoğan — calling the coup attempt “a gift from God” — and the government initiated a widespread purge aimed at cleansing sympathizers of the movement from within state institutions, dehumanizing its popular figures and putting them in custody.
Turkey’s Justice Ministry announced on July 13 that 50,510 people have been arrested and 169,013 have been the subject of legal proceedings on coup charges since the failed coup.