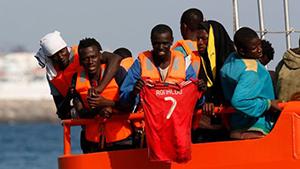 Spain’s coastguard says it has rescued 600 migrants crossing from Morocco in a 24-hour period amid a spike in the number of migrant arrivals.

The rescued migrants were in 15 vessels including toy paddleboats and a jet ski and included 35 children and a baby.
The UN says more than 9,000 people have arrived in Spain so far this year – three times as many as the previous year.
More than 120 people are believed to have drowned attempting the crossing.
The increase in crossings means Spain could overtake Greece this year in the number of migrants arriving by sea, the UN’s International Organization for Migration (IOM) said earlier this month.
Most are sailing across the 12km (seven-mile) Strait of Gibraltar and many are choosing cheap, child-sized paddle boats without motors that allow them to bypass people smuggling networks and their fees.
Some migrants are using social media to contact the Spanish authorities and inform them of their location once they are in territorial waters, the BBC’s Gavin Lee in the Spanish city of Tarifa says.
However, a much larger number – nearly 100,000 – have crossed from Libya to Italy since the start of the year. The IOM says 2,242 people have died on that route.
In June, about 5,000 people were rescued in one day in the Mediterranean off Libya, Italian coastguards said.
The number of migrants arriving in Spain by sea does not include those entering the Spanish enclaves of Ceuta and Melilla in north Africa, which are the EU’s only land borders with Africa.
A note on terminology: The BBC uses the term migrant to refer to all people on the move who have yet to complete the legal process of claiming asylum. This group includes people fleeing war-torn countries such as Syria, who are likely to be granted refugee status, as well as people who are seeking jobs and better lives, who governments are likely to rule are economic migrants.