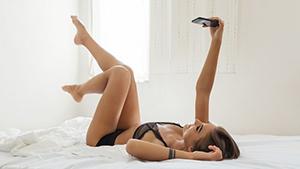 The Sun
A model keeps falling foul of Instagram due to her racy posts in her mission to “free the cleavage.”

Elle Johnson is making a habit of being banned from the social media site.
After she was banned twice for flashing what Instagram deemed to be too much flesh, Johnson decided to keep going.
The glamour model has more than 450,000 followers thanks to her snaps.
But Instagram keeps blocking her for “violating community guidelines”.
She was first banned in January when some people found her content too shocking. And again she was reported in April and blocked once more – but continues to post raunchy pictures.
She made a return to the site last months with a set of explicit photos.
The model posted pictures of herself in see-through bikinis and lingerie and prompted more complaints.
She posted on Twitter: “This photo is not available on Instagram because @instagram has something against sideboob. Actually, they just have something against me.”
Fans replied saying they supported her, with one saying: “Well Insta’s loss is Twitter’s gain.”