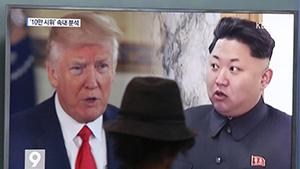 The conflict with Kim Jong Un raises concern that Washington may be more unpredictable than North Korea.

Donald Trump recently posted a tweet that triggered consternation among his top military leaders. “After consultation with my generals and military experts,” he wrote early one morning, “please be advised that the United States Government will not accept or allow …” Officials at the United States Defense Department suddenly became very nervous when they saw the tweet. Was the president announcing a military strike? Against North Korea? Nine minutes later, the next tweet provided the denouement: The president wanted to ban transsexuals from military service.

This anecdote says a lot about how little confidence even close associates have in the American president. He’s an impulsive man without a shred of foreign policy experience. This is also evident in Trump’s threats against North Korea, which raised fears of a war last week. Trump spoke in almost biblical terms when he threatened “fire and fury like the world has never seen.” No other U.S. president has ever displayed such recklessness, and for good reason. If the United States descends to the same rhetorical level as North Korean dictator, it not only increases the risk of war, but also normalizes Kim Jong Un’s own belligerence.

The North Korean ruler, whose isolated realm has now become a global security risk, isn’t crazy. His actions are calculated. His supreme objective is that of preserving his murderous regime and nuclear weapons are his life insurance policy, intended to provide him with international respect. North Korea could soon have the ability to reach Los Angeles or New York with nuclear-armed intercontinental ballistic missiles. As such, Washington’s concern is understandable, but Trump’s options are limited. There is no military solution.

The idea of a preemptive strike has repeatedly been raised, through which the United States could eliminate North Korea’s nuclear weapons. But even if such an attack were unexpectedly able to neutralize the country’s entire nuclear arsenal, retaliation would be an almost certainty. Strategists fear that Pyongyang would react with an artillery strike against the South Korean capital Seoul. This could lead to the deaths of millions of people, China could be drawn into the war and the consequences would be incalculable. Trump’s advisers know this.

For months, Trump has been using Twitter to call upon the Chinese leadership to resolve the conflict. But that’s wishful thinking. Although Beijing is displeased with Kim, China is even more worried that the North Korean regime will collapse, leading to the north’s reunification with U.S. ally South Korea. The Chinese have recently increased pressure on Pyongyang, but they could certainly do more, including as an intermediary. But even if they wanted to, they could not take away Kim’s nuclear weapons.

The only tool left for the United States is a holdover from the Cold War era: deterrence. Washington must build a credible military threat, issue explicit security guarantees for South Korea and Japan and impose tougher economic sanctions against North Korea. At the same time, the United States and its allies could also offer a compromise to North Korea. They could hold out the prospect of diplomatic and economic relations in exchange for concessions from Pyongyang.

This blend of military and economic pressure could ultimately lead to regime’s collapse, or increase its willingness to engage in real negotiations. But that requires patience, which is why the appropriate response to Kim Jong Un is not “fire and fury,” but something much more complicated: pressure and diplomacy.

The good news is that no one is interested in a war, at least from a rational perspective. The bad news is that one cannot always rely on all parties behaving rationally. Escalation usually occurs when both sides make the wrong calculations. Nothing would be worse that sliding into a war by accident. That’s what makes Trump’s escalating words so dangerous. It is advisable, to be sure, to judge him by his actions more than by his words. He has often made drastic statements before only to listen to his advisers in the end.

Nevertheless, his rhetoric raises concern that the unpredictable player in this conflict is not the North Korean dictator but the American president.

Translated from the German by Christopher Sultan
URL: