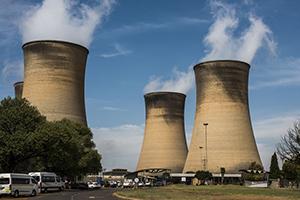 The economics of power production work a lot better with natural gas and renewables as sources.
By Liam Denning

Realists will tell you that what counts are facts on the ground. But sometimes half-formed facts on the ground can be just as important.
A clutch of these have materialized in the U.S. power sector of late.
Southern Co. several weeks ago suspended work on what was supposed to be a pioneering plant to turn coal into gas for generating electricity. It is instead running as an extraordinarily expensive regular natural gas-fired station. Now, Southern is reportedly seeking federal help to save a project to build two long-delayed new nuclear reactors in Georgia, where costs appear to have spiraled to over $25 billion. Another two half-built reactors of the same design in South Carolina were just scrapped altogether after a similar litany of delays and busted budgets.
These matter because energy markets tend to trend toward what’s been built or is about to be built. Think of the current debate over vehicles and how often you hear about the preponderance of gasoline stations and relative paucity of battery chargers as determining how that battle plays out.
This applies particularly to power plants and the industries that supply them with fuel, because, once built, they tend to stick around for decades, long after their initial investment has been depreciated.
Here is how the U.S. generation portfolio has changed over time:
You’ll notice that nuclear power’s big wave was in the 1970s and 1980s, buoyed by a desire to reduce dependence on foreign energy after the oil shocks and before places like Three Mile Island and Chernobyl became household names and helped bring construction to a halt.
You’ll also notice the boom in gas-fired plants in the 1990s and the first decade of the 21st century. That owed a lot to the pioneering efforts of a company you may have heard of called Enron Corp. Besides fleecing investors and the state of California, Enron also found time to pave the way for the natural-gas futures market and push for — or violently shove for — deregulation of wholesale power markets. The resulting boom in gas-fired power-plant construction mirrored the tech bubble in terms of both timing and financial losses.
Yet, also like the tech bubble, it was something of a “good binge,” to borrow a phrase from Morgan Stanley’s Ruchir Sharma. For example, you may have lost money investing in the likes of Pets.com, but, on the other hand, you’re probably reading this (and doing much else) online. Similarly, the dash for gas burned a lot of cash (especially if you bought Enron stock). But, as a result, when the shale-gas boom came along, there was lots of underused power-plant capacity ready to burn the resulting flood of fuel.
That has been the undoing of coal-fired plants, whose last big construction wave happened in the 1970s and 1980s, making them pretty old at this juncture:
The other essential point here is that U.S. electricity demand has stopped growing over the past decade, partly due to recession but more a reflection of structural changes in the economy and rising efficiency.
That’s another reason it is tough to make the economics of a new nuclear or coal-fired plant work. By the time they are permitted and built, it can be many years after the initial proposal before such plants generate any electricity (and revenue). That was less of a problem in decades past when, even if initial budgets proved optimistic, ever-increasing demand meant that the capacity would be needed at some point and therefore produce cash flow.
Even if you can justify plowing billions into a giant new plant pushing more supply into a flat market, gas-fired plants can be built more quickly, as can renewable-power sources such as wind-turbines and solar arrays.
The latter do require high upfront capital. But, crucially, they can be built more easily in increments rather than big, one-off projects. Moreover, at least for now, capital for newer forms of energy technology doesn’t seem to be in terribly short supply, if Tesla Inc.’s latest bond issue is anything to go by. And once built, their fuel costs are zero, which means that, when they run, they switch on first and tend to suck revenue away from traditional plants.
Hence, the argument for nuclear plants, and even coal-fired plants, has shifted of late toward less straightforwardly economic grounds, such as job security or even — a real sign of desperation — national security.
In the meantime, the facts on the ground continue to change in ways unfavorable to the incumbent power sources. Focusing in on recent history, and the near future, it is clear which technologies are now battling it out for a bigger share of America’s electricity demand:

America’s coal-fired and nuclear plants aren’t about to switch off en masse, just as plenty of gas-guzzlers will continue to be driven off dealer lots for a while yet. But capital, with its lust for growth, continues to migrate elsewhere. Ignoring that fact isn’t a realistic strategy.
This column does not necessarily reflect the opinion of Bloomberg LP and its owners.