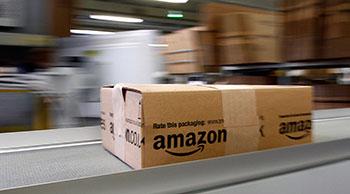 — Donald J. Trump (@realDonaldTrump) August 16, 2017
In his Wednesday Twitter post Trump didn’t specify which missteps Amazon had taken. However, the online retailer had been previously criticized by the president for gaining its competitive edge by not paying enough in taxes.
Amazon’s shares dropped 0.5 percent at $978.00 in early Wednesday trading after the president’s comments.
#Trump tweet sends #Boeing stock into tailspin https://t.co/ZwRO7Szsyupic.twitter.com/bIidFXFdOy
— RT America (@RT_America) December 7, 2016
Trump’s allegations stem from the fact that Amazon doesn’t operate traditional stores in the US and this allows the company to avoid paying local taxes legally. In 1992, the US Supreme Court banned states from collecting sales tax from businesses that do not have a physical presence in the state.
In April, Amazon added ten states to the list of jurisdictions from which the retailer collects sales tax. Now, online shoppers from 39 states have to pay sales tax.
At the same time, Amazon online expansion has significantly damaged the US retail industry. Retail chains such as Sears and Macy’s are reporting dropping sales figures year after year. To cut expenses, many retailers have been forced to close outlets and ax jobs.
Trump: WaPo fabricated facts on ending CIA train-and-equip program for Syrian rebels https://t.co/mQcNxWZSfwpic.twitter.com/pPpH6nfObR
— RT America (@RT_America) July 25, 2017
Amazon has announced plans to hire 50,000 people across the country to help fulfill customer orders.
Donald Trump has previously criticized the company over its connection to The Washington Post. The newspaper owned by Amazon founder Jeff Bezos has been accused by Trump of covering his presidency unfairly and protecting the retailer’s interests from an increased tax liability.