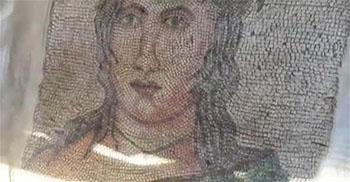 Security teams in Istanbul detained two suspects who had been trying to sell a mosaic depicting a woman’s face on Aug. 17.

Gendarmerie forces received intelligence about two suspects identified only as M.K. and H.A.B. who had been looking for a customer to buy a historical artifact illegally smuggled to the country in the Sarıyer district.

They stopped a suspicious car in the Zekeriyaköy neighborhood and seized a mosaic with a female face in the truck.

Its value was not immediately clear.

The mosaic was later handed to the Istanbul Museum Directorate and the suspects were referred to court.