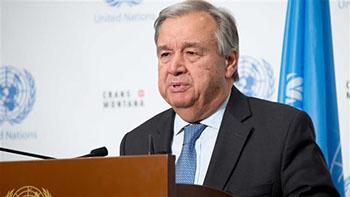 UN Secretary General Antonio Guterres has stressed that Latin American countries must be safeguarded from foreign intervention after US President Donald Trump threatened military action in Venezuela.
On Friday, Trump said his administration was considering many measures, “including a possible military option if necessary,” to repair what he referred to as a “dangerous mess” in Venezuela in the wake of the formation of the country’s Constituent Assembly.

Apart from being rejected by the government in Caracas and Venezuela’s opposition coalition, the statement was also rejected by all Latin American countries — not only allies to President Nicolas Maduro such as Cuba, Bolivia, Ecuador and Nicaragua, but even those strongly opposed to Maduro, including Mexico, Brazil, Argentina, Peru and Chile.
During a Wednesday press conference, Guterres said “it is very clear that Latin America has successfully struggled over the last decades to free itself from both foreign intervention and authoritarianism.”
“This is a lesson that is very important, to make sure that this legacy is safeguarded — and namely in Venezuela, both aspects of it,” he added.
He further called for talks to restart between the government and the opposition as he believed that “only… a political solution based on those negotiations” can resolve the standoff between the two sides.
Guterres also hailed efforts made by international mediators and regional leaders towards restarting talks in the country. “I’ve been in close contact with all of them,” he added.
The UN chief further criticized Venezuela’s President Nicolas Maduro over the formation of the all-powerful constitutional assembly.
Guterres’ remarks come as the oil-rich but impoverished country has been convulsed by months of deadly protests against the government in Caracas.
Political tensions in Venezuela rose recently after Caracas announced plans to establish a Constituent Assembly to take over the opposition-controlled parliament and rewrite the constitution. The opposition saw the move as an overt attempt by President Maduro to accumulate power.
Protests erupted on the streets, and clashes led to the death of at least 120 people from the two sides.