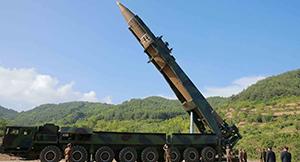 Tensions on the Korean Peninsula appeared to ease up following intense saber-rattling by the US and North Korean sides last week, but once Pyongyang’s leaders observe the US ramping up war games again, another ballistic missile test may be imminent, Seoul warns.

Ulchi Freedom Guardian drills are slated to commence on Monday, Korean media reported Wednesday. “There is a great possibility that North Korea will carry out strategic or tactical provocations to protest the latest UN sanctions and the UFG exercises,” the South Korean Defense Ministry said in a statement to the nation’s lawmakers.
Military exercises in which US forces essentially rehearse and practice attacking the Democratic People’s Republic of Korea (DPRK) “are not funny to [North] Korea,” Radio Sputnik Loud & Clear host Brian Becker said Tuesday.
Speaking from Ottawa, Canada, author Stephen Gowans said the North Korean military had been “developing plan for a so-called ‘enveloping fire,’ which would amount to firing ICBMS at Guam, which would fall outside the territorial waters of the United States, it should be added. [Supreme Leader Kim Jong-un] said that he’s reviewed those plans, and he would wait and see if the United States continued to carry out dangerously provocative acts before deciding on whether to act on that plan.”
Kim’s decision to pump the brakes on aiming intercontinental ballistic missiles at the US’ Anderson Air Force Base on Guam was a “very positive signal,” associate professor John Delury of Seoul’s Yonsei University told the Los Angeles Times on Monday, “but he’s waiting for the Americans to reciprocate.”
Meanwhile, Gen. Joseph Dunford, chairman of the US Joint Chiefs of Staff, told “South Korean President Moon [Jae-in] that North Korea should be coerced into abandoning its nuclear program by diplomacy and economic measures,” Gowans said, “but that the United States was preparing military options in case those efforts failed.”
Trump’s threat to send “fire and fury” North Korea’s way was a “veiled threat of nuclear war,” says Gowan, who anticipates that such a scenario would amount to the US “committing another genocide in North Korea” in the 21st century after wiping out 10 to 15 percent of the population during the North Korea-US armed conflict from 1950-1953 (known in the US as the Korean War and in North Korea as the Fatherland Liberation War).
According to him, “although the DPRK has been portrayed as threatening Guam, often it’s not pointed out that Guam is actually a dagger pointed at [the Korean Peninsula], because it’s on Guam that the United States stations strategic bombers to be used against China or North Korea, potentially.”
On Wednesday, the UK’s Royal United Services Institute released a new report warning that due to the “volatile and impulsive” character of the sitting US president, “a new Korean war is now a real possibility.”