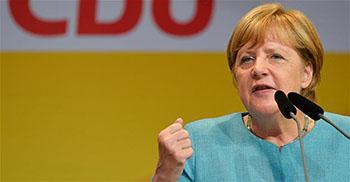 Ankara has voiced its concerns over German Chancellor Angela Merkel’s remarks suggesting that Berlin would not pursue an update of the Customs Union with Ankara, criticizing her comments for compromising “the benefits of the agreement for EU countries.”

“It is not right for an EU-member country to behave like it is instructing EU institutions,” Presidential Spokesman Ibrahim Kalın told reporters on Aug. 17.

“The Customs Union agreement is built on a win-win principle. We are talking about a relationship that is based on the mutual benefit of both Turkey and European countries. When it is precluded, postponed or cancelled, then all European countries will be harmed, not just Turkey,” Kalın said.

His comments came after Merkel touched on Turkey–Germany relations on a live interview on YouTube on Aug. 16.

“We are not opening new chapters in Turkey’s [EU] accession bid and we have lowered membership preparation aid to a minimum. Also, for the time being, the Customs Union deal with Turkey will not be changed or updated,” Merkel said.

Çelik warned against allowing a bilateral dispute between Germany and Turkey to become a wider problem for Ankara and Brussels.

“The EU Commission should not allow a problem between Turkey and Germany influence the EU. The EU resolutions are determined by principles,” he said, speaking at a joint news conference with British Minister of State Alan Duncan.

The Customs Union between Turkey and the EU entered into force on Dec. 31, 1995. It covers all industrial goods but does not address agriculture (apart from processed agricultural products), services or public procurement.

The European Commission stated on Dec. 21, 2016 that it had asked the European Council for a mandate to launch talks with Turkey to modernize the existing EU-Turkey Customs Union.

The upgrade of the agreement forms a central part of efforts to deepen relations in key areas of joint interest identified at the EU-Turkey Summit of Nov. 29, 2015, and in the EU-Turkey statement of March 18, 2016.

Meanwhile, Kalın also stated that Ankara has issued a diplomatic note to Berlin asking whether the fugitive prime suspect of the July 2016 coup attempt, Adil Öksüz, is in Germany.

“If it is found that he is in the country, our primary demand from the German authorities would be an immediate start of the extradition process,” he said.

“Our expectation from German authorities is for them to investigate the issue in a very serious manner. We know that our intelligence organization is in close cooperation with the German authorities, briefing them on a regular basis,” Kalın added.