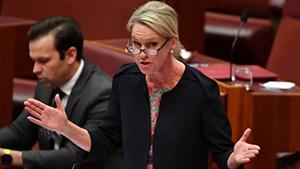 A sixth Australian MP will have their eligibility for office decided by the nation’s High Court over the issue of dual citizenship.
Government Senator Fiona Nash revealed she is a UK citizen by descent because of her Scottish-born father.

Australian politicians are not allowed to hold dual citizenship.
The saga has gripped Australian politics for five weeks, forcing dozens of MPs to make statements about their citizenship status.
Ms Nash is deputy leader of the National Party, the junior partner in Prime Minister Malcolm Turnbull’s governing coalition.
Like Deputy Prime Minister Barnaby Joyce, who is a New Zealand dual citizen, Ms Nash said she would continue in her position until the High Court clarifies a section of Australia’s constitution.
She said she had legal advice that she had not breached rules.
Four other politicians will also have their eligibility tested in court as early as next week:
• Minister for Resources and Northern Australia Matt Canavan, a possible citizen of Italy
• Far-right Senator Malcolm Roberts, who claims he renounced his UK citizenship
• Scott Ludlam, who resigned as co-deputy leader of the left-wing Greens over his New Zealand status
• Another Greens co-deputy leader and Canadian dual national, Larissa Waters, who has also resigned.
Mr Joyce sits in the lower House of Representatives, where Mr Turnbull’s government has only a one-seat majority.
If any government MPs in the lower house were to be ruled ineligible, it would trigger a complex process that could threaten Mr Turnbull’s hold on power.
On Thursday, Australian Justice Minister Michael Keenan was forced to deny he was a British citizen, but his case will not go before court.