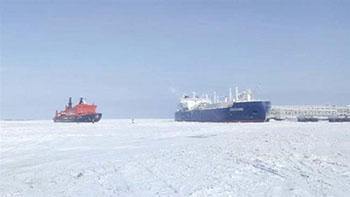 A tanker carrying liquefied natural gas has made the passage from Europe to Asia via the Arctic unaided, a maritime course that has become possible due to global warming, energy firm Total said Thursday.
It is “the first commercial vessel to travel alone the Northern Sea Route which permits reaching Asia in 15 days via the Bering Strait,” said the French firm.

That is half the time it takes to travel to Asia via the Suez Canal, according to Total.
The 300-metre (984-foot) vessel, the Christophe de Margerie, was launched in June and is the first ice-class LNG tanker that can travel the northern route without escorting icebreakers from July to November.
It left Snovhit in Norway on July 27 after taking on LNG and is traveling to the port of Boryeong in South Korea.
The vessel is the first of 15 that Total and its partners have ordered to transport gas from the Yamal peninsula along Russia’s arctic coast.
Global warming has made the northern passage along Europe and Asia navigable for longer periods in recent years, although merchant vessels have until now needed icebreakers to accompany them.