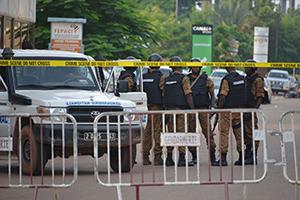 By Pauline Bax
Islamist militant attacks in West Africa are increasing in intensity. High-profile strikes on resorts and restaurants that have shattered the area’s tourist industry get most of the attention.

Yet barely a week goes by without a deadly incident in a remote rural zone where some of the world’s poorest people live. Instability in the region affects Europe because it benefits organized crime networks which are engaged in the smuggling and trafficking of migrants to the shores of Italy.
1. What’s the source of the trouble?
Mainly continuing instability in Mali and, further afield, in Libya, where turmoil has opened up smuggling routes and access to weapons. A French military intervention in 2013 dealt a heavy blow to jihadist groups that partnered with ethnic Tuareg rebels to seize control of northern Mali a year earlier. Deprived of their urban bases, the jihadists have resorted to bombings and hit-and-run attacks. Their preferred targets in Mali are army posts and the 15,000-person United Nations peacekeeping mission, which is the most deadly of all current UN operations worldwide. They’ve also branched out, staging attacks in Ivory Coast and Burkina Faso. And they’re extending their influence into southern Mali, tapping into local grievances by offering an alternative political discourse to people who feel forgotten by a government widely regarded as ineffectual and self-serving.
2. Which jihadist groups are active in the region?
The oldest and most well-known is al-Qaeda in the Islamic Maghreb, which operates in the Sahara desert and the Sahel, an adjacent semi-arid zone to the south that spans part of the continent. AQIM uses local recruits to carry out spectacular attacks, and has made tens of millions of dollars in ransom from kidnapping tourists and aid workers. Originally formed under a different name to fight Algeria’s secular government in the 1990s, the organization aligned with al-Qaeda in the 2000s. It was AQIM, plus the splinter groups Ansar Dine and the Movement for Unity and Jihad in West Africa, that helped Tuareg rebels capture northern Mali. In March, four groups — AQIM, Ansar Dine, an offshoot called the Macina Liberation Movement, and Al Mourabitoune, which has claimed responsibility for attacks on hotels in Mali and Burkina Faso — announced that they had joined forces under the banner the Group for Supporting Islam and Muslims.
3. Do they have links with Islamic State?
Like the terror group Boko Haram in Nigeria, a few AQIM offshoots have pledged support for Islamic State. But AQIM doesn’t collaborate with Islamic State, and the recently announced coalition confirmed its allegiance to the leaders of al-Qaeda. Tension between supporters of the rival groups in West Africa has resulted in violence in the past.
4. Why is it so difficult to stop the jihadists?
The Sahel and the Sahara are vast spaces with hostile climates that national governments have struggled to control for decades. Analysts say that jihadists are able to gain influence in the region, especially among the increasing numbers of young people, because governments are weak and have little reach beyond the big cities. Some jihadist groups provide mobile courts in places where judges are absent, give protection to cattle herders and offer simplified marriage procedures that let young people escape the control of their elders. In Niger, more than 60 percent of the population is younger than 18. Prospects of marriage are slim, jobs are sparse, and local hierarchies can result in social exclusion. Radicalization is often fueled by resentment against the secular state. In the Sahel, where most young people are raised as pious Muslims, strict versions of Islam can tempt those who experience what the International Crisis Group calls “a potent sense of alienation.”
5. How are governments responding to the violence?
They are sharing intelligence and cooperating more closely. Five countries — Burkina Faso, Mali, Chad, Niger and Mauritania — have agreed to set up a regional force of up to 5,000 soldiers to fight terrorism and organized crime. French lobbying to have the UN provide financial backing met with opposition from the U.S., which seeks to rein in UN spending. That means that the five nations will be responsible for ensuring the troops have adequate resources. The European Union has committed 50 million euros ($59 million). The joint force, scheduled to deploy this year, is to work alongside the UN peacekeepers in Mali and a 3,000-strong mobile French force known as Barkhane.
6. Is there any downside to the use of force?
There’s growing unease among political analysts over the militarization of the region. While Malians initially hailed the French troops as liberators, they now view them with suspicion. Military spending has ballooned in Niger and Chad, at the expense of health and education portfolios. Abuses by soldiers can trigger a backlash against the government, as they have in Mali, where minority groups say they’ve been singled out during security crackdowns. Experts agree that any effective long-term strategy against the jihadists must include ways of reversing the alienation felt by West Africa’s young. That means strengthening local governance, halting corruption and creating jobs.
7. What does this have to do with Europe?
Jihadist groups thrive on the instability they help to create. So do organized-crime networks, which use the chaos in Libya to smuggle people north to Europe and goods, including weapons, south through Africa. Most European nations didn’t pay much attention to security issues in West Africa until the biggest wave of displaced people since World War II arrived in 2015. Now, they increasingly consider the presence of jihadists and smugglers symptoms of the larger problems of failing states. That’s why Germany and the Netherlands have contributed troops and helicopters to the UN mission in Mali, while the U.K. has sent drones and agreed to train soldiers.
— With assistance by Andre Janse Van Vuuren