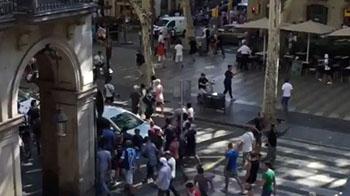 Motionless bodies have lined Barcelona’s famous Las Ramblas stretch connecting Plaça de Catalunya with the Christopher Columbus Monument at Port Vell, a graphic video from the scene shows.
At least 13 people were killed and over 110 injured after a van smashed into a group of pedestrians in the heart of the regional capital. Extremely graphic footage obtained by RT immediately after the incident illustrates the tragedy. Dozens of motionless people lay still in an open air, tree-lined pedestrian mall.

Some people are seen attending to the victims as sirens wail in the background. The gruesome footage shows some people dead, some critically wounded. Blood is seen on the faces of victims and on the pavement below the market stalls.
At least 15 of the 119 people injured in the attack were seriously wounded, interior department chief Joaquim Forn told journalists. Another 23 suffered moderate wounds while at least 42 others were lightly injured in the tragedy which claimed 13 lives.
“The van was speeding through under the trees in the pedestrian area. The van was going – I don’t know – at 80 to 100kmh. It was really fast. It was knocking people down – maybe 10 or 15 people,” an eyewitness from the UK, Brendon Sissing told RT. “Then the van stopped, and it was pretty badly damaged when I saw it. There were hundreds of people there. Then accelerated again, and kept on going. I saw at least 10 people on the ground, some receiving treatment.”
The Islamic State terrorist group was quick to claim responsibility for the attack.
The deliberate actions of the van driver on a sidewalk of a busy tourist area of Barcelona was “clearly a terror attack intended to kill as many people as possible,” senior police official Josep Lluis Trapero told reporters.
#BarcelonaAttack:
– 13 dead, 100+ injured
– 2 suspects arrested, neither is the driver
– #ISIS claims responsibility https://t.co/Dr3iQbXNu3
— RT (@RT_com) 17 августа 2017 г.
Spanish authorities have so far detained two suspects. One is a Spanish national from Melilla, a Spanish autonomous city located on the north coast of Africa on the Moroccan border. The other person arrested is Moroccan.
The suspects were apprehended in the towns of Ripoll and Alcanar, where an explosion ripped through a house Wednesday night. Police believe that none of the detained suspects were the driver of the van.