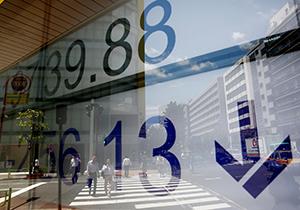 Confidence was shaken further after a van mowed through crowds of tourists in Barcelona on Thursday, killing at least 13 people and injuring more than 100 in an attack authorities were treating as Islamic terrorism.
In Cambrils, a town south of Barcelona, police said they had killed five attackers on Thursday night to thwart a linked “terrorist attack.”
MSCI’s broadest index of Asia-Pacific shares outside Japan .MIAPJ0000PUS dropped 0.7 percent, but still looked set to gain 1.4 percent for the week after tensions between North Korea and the United States came off the boil.
Japan’s Nikkei .N225 slid 1 percent on global jitters and a stronger yen, and looked set to lose 1.3 percent for the week.
“The realization of the worst case scenarios (in Washington and in North Korea) would likely bring about a more significant drop in global equity markets,” said Jingyi Pan, market strategist at IG in Singapore.
Until then, “sentiment may remain the driver for the fluctuations in the markets and could make for good entry opportunity for regional markets,” she added.
Chinese blue chips .CSI300 slipped 0.3 percent, after data showed growth in new home prices slowed in July, but looked set for a 1.7 percent weekly gain as a year-long construction boom boosted shares of building materials firms.
Hong Kong’s Hang Seng .HSI retreated 1.1 percent, up 0.7 percent for the week.
Overnight, Wall Street’s major indexes slumped between 1.2 percent .DJI and 1.9 percent .IXIC. The S&P 500 index .SPX posted its biggest drop in three months.[.N]
Concerns have grown over Trump’s ability to push through his economic goals, such as tax cuts and infrastructure spending, following the exodus of executives from two prominent business councils in reaction to his response to clashes last weekend in Charlottesville, Virginia.
“Diminishing West Wing support from both business and political allies will continue to abrade investors’ confidence in President Trump’s economic agenda,” Stephen Innes, head of Asia Pacific trading at OANDA in Singapore.
“The dollar, for the most part, remains in a state of directionless confusion, supported on the one hand by resurgent U.S. economic data yet burdened by the expanding White House rat’s nest.”
Trump on Thursday decried the removal of pro-slavery Civil War Confederacy monuments, which have fueled U.S. racial tensions, stoking worries that some of his key policy staffers and aides may quit.
Chief among them were rumors that Gary Cohn, director of the National Economic Council, would resign, following Trump’s defense of white nationalist protesters in Charlottesville.
A statement from the White House that Cohn intends to remain in his position calmed markets only briefly before selling resumed.
The dollar posted its third session of losses against the yen, falling 0.15 percent to 109.4 yen JPY=D4 and shrinking this week’s gains to 0.4 percent.
The dollar index .DXY, which tracks the greenback against a basket of six major peers, was flat at 93.633, surrendering early gains.
The index’s earlier strength was driven largely by weakness in the euro, the biggest component of the basket, after minutes of the European Central Bank’s July meeting showed policymakers were worried about a possible overshoot in the common currency, whose strength is making the bloc’s exports less attractive and imports cheaper.
The euro EUR=EBS inched up almost 0.1 percent on Friday to $1.17305, making up some of the previous session’s 0.4 percent drop.
Bitcoin BTC=BTSP, which hit an all-time high of $4,480 in the previous session, was little changed from Thursday’s close at $4,259.91.
In commodities, oil prices pulled back following recent gains.
Global benchmark Brent LCOc1 pulled back 0.2 percent to $50.93 a barrel on Friday, after jumping 1.5 percent on Thursday on a drop in U.S. inventories. It is on track for a 2.2 percent decline for the week.
U.S. crude CLc1 fell 0.15 percent to $47.02 on Friday, surrendering some of Thursday’s 0.7 percent gain, heading for a 3.7 percent weekly loss.
Spot gold XAU= was steady on Friday at $1,287.22 an ounce, holding most o Thursday’s 0.4 percent gain. It is set to end the week down 0.1 percent.
Industrial metals, which posted multi-year highs this week, waned on Friday as investors took profits.
Three-month copper on the London Metal Exchange CMCU3 was down 0.5 percent to $6,457 a tonne, extending Thursday’s 0.6 percent drop.
Benchmark zinc CMZN3, which set a new decade high of $3,147 a tonne on Thursday, closed lower but was up 1 percent to $3,092 on Friday.
Reporting by Nichola Saminather; Editing by Kim Coghill