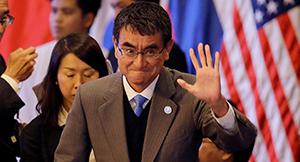 MOSCOW (Sputnik) — Sources in both governments told the Nikkei Asian Review newspaper that Minister Kono planned to meet with Foreign Minister Sergey Lavrov and First Deputy Prime Minister Igor Shuvalov.
The paper said the trip could be pushed back to December depending on the Japanese parliament’s schedule. Minister Kono may also accompany the prime minister during his visit to Vladivostok next month.
Hopes are that Russia and Japan will make headway in their dispute over the islands, referred to as Northern Territories by Tokyo, the Japanese Foreign Ministry told the outlet.
The Russian and Japanese deputy foreign ministers met in Moscow on Thursday to discuss the first stage of joint economic activities in the island chain contested by Japan. The row over the ownership of Iturup, Kunashir, Shikotan and Habomai has prevented the two neighbors from signing a peace treaty after the end of World War Two.