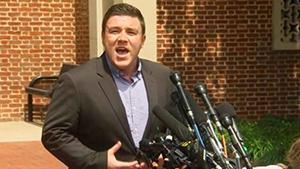 By Doug McKelway -FoxNews.com
Jason Kessler, who organized the “Unite the Right” rally in Charlottesville, Va., told Fox News late Thursday he’s in hiding after getting a string of death threats.

Last Saturday, a car rammed into a crowd of counter-protesters in Charlottesville, killing one woman and injuring some 19 other people. The next day, protesters chased Kessler from a press conference he was trying to hold.
The nationalist blogger maintains his group is not a collection of white supremacists, but rather a “civil rights group.” He said he graduated from the University of Virginia, voted for Barack Obama in 2008 and once attended an Occupy Wall Street rally in Charlottesville.
His grievances are rooted in what he calls the identity politics of today. “Some are the discriminatory policies of affirmative action, college admissions, history books being rewritten, blaming American whites for slavery,” when it was a worldwide institution.
“Every culture had slavery,” he said.
He also blamed the “existential crisis of immigration, mass immigration from third world countries.”
Kessler said he “never met” James Alex Fields Jr., the suspected driver in the deadly crash. As for the death of the woman, Heather Heyer, Kessler said: “no comment.”
In preparation for last Saturday’s rally, he met repeatedly with Charlottesville police and was assigned a police liaison. He says she went over the city’s safety plan with him, let him see it, but would not let him photograph it. He said that the captain “let slip” that in preparation for the rally, the city and police “did not use government servers because they did not want to get FOIA’d” — referring to the Freedom of Information Act.
He said he has received no calls, no visits from police or federal investigators since the event. “I’ve done nothing wrong,” Kessler said.
Kessler said the organization’s funding came from “donations to our PayPal account, before it was shut down.” Now, “we fund ourselves, because most of us have or used to have jobs, before this.”
He said that police had given the white nationalists a specific entry way to the park. But that as they arrived at the park at 8:30 a.m. on Saturday, the road to that entrance was blocked by police. The caravan of shuttle busses that the nationalists had rented had to detour to the opposite side of the park, where most of the Antifa demonstrators were positioned.
That was the point at which tensions rose meteorically, he said. They had to pass through Antifa, Black Lives Matter, and other opponents at close range.
The body armor, clubs and helmets his people wore during the rally were strictly defensive, “for our own safety,” he said.
Doug McKelway joined Fox News Channel (FNC) in November 2010 and serves as a Washington-based correspondent. Click here for more information on Doug McKelway.