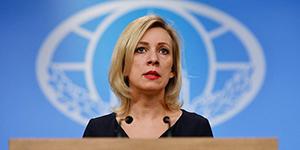 Moscow, SANA- Russian Foreign Ministry spokeswoman Maria Zakharova said that Russia will continue its efforts in the framework of Astana process to implement the agreement to establish de-escalation zone in Idleb and to save its population from the violence of terrorists and criminals.

In a press conference on Thursday, Zakharova said that situation in Idleb province is a matter of concern because of the increased activity of Jabhat al-Nusra terrorist organization, adding that this organization uses the period of calm to consolidate its military capabilities.
She affirmed that the improvement of the political and military situation in Syria and the implementation of practical steps in the process of establishing de-escalation areas and the deployment of units of the Russian military police on its sides allow hope to improve the humanitarian situation radically and build bridges of trust in the Syrian society gradually, in addition to the opportunity to focus more efforts to combat terrorists of ISIS and Jabhat al-Nusra.
Manar/Mazen