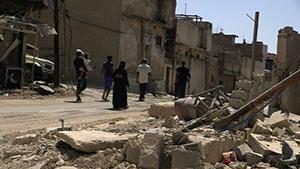 By Yalda Hakim- BBC News
“My husband is buried over there!” says Ishar, pointing towards a pile of rubble where her house once stood.

Draped in a dark blue shawl and a long black abaya, the 32-year-old mother-of-four stumbles through the ruins of the Old City in the west of Mosul, which was recaptured by Iraqi government forces in July after an almost nine-month battle with so-called Islamic State.
She grips tightly on to her children; they’re all she has now.
“Every day and night we could hear the bombs and heavy fighting. We moved in with our neighbours because we felt safer together,” she recalls.
“One day the neighbours said to us: ‘We should leave before we are killed.’ My husband was reluctant, worried that if we were caught IS would kill us. But our neighbours said many people had made similar journeys out of the city and that we’d be fine if we left in the dead of night.”
Holding back tears, Ishar says their greatest fear was for the 16 children, including her own, for whom they were caring.
“Finally one night, carrying whatever little clothing we could, we decided to leave. We walked about 200m before one of the IS fighters stopped us.”
“He asked where we were going. We said we had sick children with us and were just going out to see a doctor, and that we’d be back”.
The IS fighter accused them of lying and attempting to flee to an area controlled by the Iraqi military.
“They separated the men from the women and children. We screamed and cried for our husbands, begging IS not to take them away. I knew they would kill my husband. I begged the IS fighters to allow us to spend just one last night with him.”
Ishar told me her husband and children held each other all night and wept, knowing this would be the last time they would be together. The next day, an IS fighter shot her husband dead. The sickening screams and the gunshot could be heard from the next room.
“My city might be liberated, but it means nothing to me without my husband. Life has become even more difficult.”
There are constant reminders of the fierce battle for control of Mosul.
Next to a massive crater where a bomb was dropped is the city’s only functioning hospital.
At the entrance there is chaos. Iraqi troops have arrived in an attempt to create some sort of order.
With no security checks at the doors, there are fears that suicide bombers could sneak in. The fighting is officially over, but it is still not safe in the city.
The army says buildings have been rigged with booby-traps. Sadly, returning home now for families could mean death. Many of the injuries in the hospital have been caused by improvised explosive devices.
Dr Amjad Hazim has been working at the hospital since the beginning of the war, treating patients with shrapnel wounds, trauma and other illnesses.
Still in his 20s, he looks more like a student than one of the senior doctors at the hospital.
Three years ago, when IS took over the city, he was in his final year of medical school.
The jihadist group closed the university and employed him to treat the men of the “caliphate”.
The young doctor says he has saved the lives of many IS fighters and that is what ultimately kept him and his family alive.
“They’d see me in the street and wave hello. IS treated me very well.”
Dr Hazim now spends 15 days a month living at the doctors’ residence at the hospital and the other 15 back home with his family in East Mosul.
Food is again flowing into the markets in the east, which government forces declared “liberated” at the end of January.
Women who when they went outside during IS rule had to wear black and cover every inch of their bodies, including their hands and face, are now wearing colour again, high heels and make-up.
Cafes are playing Arabic pop tunes that were popular in 2014, just before the city fell. It is as if time stopped and Mosul residents have just picked up where they left off.
And while the level of destruction in East Mosul is nowhere near that in the West, significant landmarks have been destroyed, like the University of Mosul.

Its doors closed in June 2014 and the main faculty was turned into an IS headquarters, with the chemicals in the science labs used to make weapons and bombs.
The university was built in the 1960s and was considered one of the most respected places of learning in the Middle East. Its library was once home to more than a million books on philosophy, law, literature, international affairs and the arts, 650,000 of them in Arabic.
Among its prized possessions were rare maps, ancient manuscripts and a 9th Century Koran.
None of that survives today. For IS, the library represented everything they were against.
Ali Alhadidy, a professor of law in his 40s, says he was heartbroken when he heard what had happened to the library and its collection.
“I had pain in my heart. How can we ever get any of it back? It’s all gone.”
He remembers the moment IS arrived in Mosul.
“I was so frightened, I went into hiding. I am well known in the city, so if they figured out who I was they would have executed me immediately. I grew a long beard and tried to disguise my identity.”
For 22 months he spent his time trying to home-school his five young children.
“I knew one day they would finally be gone,” he says. “I prayed night and day for this.”
“I have hope inside me because I feel that from this dust education and light will grow and life will come back to Mosul University,” he adds.
Rebuilding the university is one thing, but the task of rebuilding this city is monumental.
Real reconciliation will also be a very difficult task.
Families no longer trust one another. Neighbours are suspicious about who worked with IS and who did not.
This is a community and a city that is fractured and will stay so for the foreseeable future.