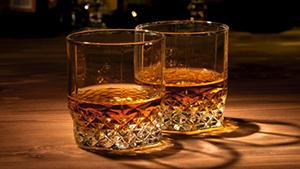 Henry Bodkin
It is a question that has divided whisky lovers for centuries: does the true aficionado add a dash or water, or drink the spirit neat?
Now, a team of Swedish scientists claims to have found definitive proof – that Scotch does always taste better with water.
Using computer simulation, they found that partially diluting whisky improves the drinking experience because it drives flavour compounds to the surface.

Simple science
Published in the journal Scientific Reports, the study showed that the alcohol content tends to push the key chemical guaiacol, which causes the smoky taste of whisky, to the bottom of a glass or bottle. But reducing the level of alcohol reverses this process, improving the drink’s flavour.
Whisky’s distinctive taste comes about by a combination of the distillation of fermented grains, ageing and then dilution.
Distilled malt whiskies typically contain about 70 per cent alcohol by volume before being aged in barrels for at least three years.
Some alcohol evaporates during the maturation resulting in an alcohol content of 55 to 65 per cent for cask-strength whisky.
Before bottling, the whisky is diluted to about 40 per cent by the addition of water, a process called “cutting”, which further changes the taste.
Just add water
However, the team at Linnaeus University says a further dash of water is still needed after the spirit is poured to achieve the best flavour.
The scientists carried out computer simulations of mixtures of water and pure alcohol, or ethanol, in the presence of guaiacol.
At concentrations of alcohol up to 45 per cent, guaiacol was more likely to be present at the surface of the liquid, rather than in the bulk.
From taste to waste
“Overall, there is a fine balance between diluting the whisky to taste and diluting the whisky to waste,” said Professor Bjorn Karlsson, who carried out the research.
“This balance will depend on the concentration and types of taste compounds that are characteristic for each whisky.
“Similar considerations can be used to optimise the alcohol concentration of other spirits including gin, rum and brandy.”
Phenols and guaiacols
Many whiskies, especially those that are made on the Scottish island of Islay, have a typical smoky taste that develops when malted barley is smoked on peat fire.
Chemically, the smoky flavour is attributed to phenols, and in particular guaiacol, which is much more common in Scottish whiskies than in American or Irish ones.
On the whole Scottish whiskies have higher levels of guaiacol than Irish or American equivalents.
The chemical was originally discovered by Ascanio Sobrero, an Italian chemist who is much better known for discovering the explosive liquid nitroglycerine in 1847.
Prof Karlsson said guaiacol contributes to both the taste and aroma of whisky.
The Highlander’s myth
A spokesman for the Scotch Whisky Association, an industry trade organisation, said taste was only “one aspect” of flavour.
She said: “It is easier to perceive the aroma compounds in the ‘head space’ above the whisky when water is added, as they become less soluble and are driven out of the liquid.
“The other factor is that reducing alcohol strength or increasing water concentration reduces the alcohol sensation on the nose and tongue, which would otherwise mask the more subtle aroma compounds.”
According to a historic Scottish proverb: “There are two things a Highlander likes naked, and one of them is malt whisky.”
Prof Karlsson’s study appears to have put that argument to bed.
The Telegraph, London