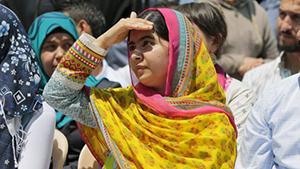 Karla Adam
Nobel laureate Malala Yousafzai said on Thursday that she was “so excited” to be offered a place at the University of Oxford, one of Britain’s most prestigious universities.

Yousafzai, 20, tweeted an image of her confirmation saying she has been accepted to study philosophy, politics and economics (PPE).

She was one of thousands of students in Britain on Thursday who received their A-level results, the final-year exams for high school students.

“So excited to go to Oxford!! Well done to all A-level students – the hardest year. Best wishes for life ahead!” she wrote.

So excited to go to Oxford!! Well done to all A-level students – the hardest year. Best wishes for life ahead! pic.twitter.com/miIwK6fNSf
— Malala (@Malala) August 17, 2017

Five years ago, the Pakistani education activist was shot in the head by the Taliban after campaigning for girls’ education. She was flown to Birmingham, Britain’s second largest city, where she received medical treatment and relocated there with her family.

But far from being silenced, Yousafzai has gone on to become a global advocate for girls’ rights to education. When she was 15, she set up the Malala Fund, which advocates for girls’ education around the world. At the age of 17, she became the youngest ever recipient of the Nobel Peace Prize.

By studying PPE at Oxford, she will be following in the footsteps of her hero Benazir Bhutto, the first female prime minister of Pakistan.

In the spring Yousafzai revealed that she received a conditional offer at a British university but didn’t say which one. She also told CBS that she was hoping to study at Oxford, but said that the interview part of the application process was “the hardest.”

On her last day of high school, Yousafzai joined Twitter. She said that graduating was “bittersweet ” because she was excited for her future yet aware that “millions of girls around the world are out of school and may never get the opportunity to complete their education.”

Responding to the news that his daughter got into Oxford, Ziauddin Yousafzai tweeted that his heart was “full of gratitude.”

On Thursday, “Malala” was trending on social media in Britain, with many passing along their congratulations.

To be fair, I think we should be congratulating Oxford.
— Julian Furman (@julianefurman) August 17, 2017

A few years ago, Malala was shot for fighting for women’s right to education. Today she got accepted into Oxford University. So much respect
— Luke Waltham (@lukewaltham) August 17, 2017

Most applicants have an internship at a NGO as their main extracurricular activity.Malala’s got a Nobel Peace Prize #completeditmate
— AK (@KnowlesyCPFC) August 17, 2017