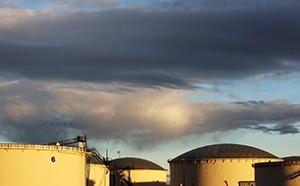 SINGAPORE (Reuters) – Oil prices fell early on Friday as part of a broad-based selloff across markets and despite signs that crude markets are gradually tightening.

Oil traders said the crude falls came amid a selloff across many other markets, including U.S. and Asian stocks, where investors voted with their feet amid growing skepticism U.S. President Donald Trump, embroiled in controversy, would achieve his economic agenda.

The falls came despite signs, especially in the United States, that crude markets were gradually tightening.

Despite a 13 percent jump in production C-OUT-T-EIA since mid-2016 to 9.5 million barrels per day (bpd), the country’s commercial crude inventories C-STK-T-EIA have fallen 13 percent from their March records to below 2016 levels.

Going forward, much will depend on output levels from the Organization of the Petroleum Exporting Countries (OPEC) which, together with non-OPEC producers like Russia, has pledged to restrict output by 1.8 million barrels per day (bpd) between January this year and March 2018 to tighten the market and prop up prices.

So far, OPEC and Russian output remains high as some members who have pledged to cut are not complying with their targets.