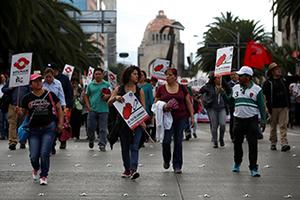 Ginger Gibson and Anthony Esposito
WASHINGTON (Reuters) – Steps away from this week’s NAFTA trade negotiations, business unified in hopes of sending a singular message: do no harm.

Representatives from the United States, Canada and Mexico convened behind closed doors at a Washington, D.C. hotel in an effort to strike a new North American Free Trade Agreement. And not far away, industry representatives from all three nations sat waiting and hoping to influence the talks.
After two days of meetings, lobbyists admitted privately that they remained mostly in the dark, swapping rumors about dates and times of future meetings but unsure what progress was being made in the first round of discussions. The meetings were largely expected to be procedural, with little discussion on substance in the early days.
The decision to renegotiate NAFTA has largely been driven by politics, chiefly U.S. President Donald Trump, who earlier this year threatened to withdraw entirely.
Business, on the other hand, has largely praised the agreement and hopes to convince all three governments to make minimal changes to the pact.
U.S.-Canada-Mexico trade has quadrupled since NAFTA took effect in 1994, surpassing $1 trillion in 2015.
“We’re all in the same boat,” said Flavio Volpe, president of the Canada’s Automotive Parts Manufacturers’ Association. “In the end we all serve primarily the U.S. consumer. So if you’re going to raise the cost structure, or if you’re going to change the dynamic flow of good or people in those three countries, you’re really hurting the cost to market for the U.S. customer.”
The U.S. had an autos and auto parts trade deficit of $74 billion with Mexico last year – without which, there would have been a U.S. trade surplus, not a $64-billion deficit. The United States had a much smaller $5.6-billion automotive trade deficit with Canada last year, but autos was the still a major component of an $11.8 billion overall U.S. goods trade deficit with Canada last year. But including services trade, the United States ran an overall surplus with Canada.
Volpe’s counterparts from the United States and Mexico were also on hand – with hopes of presenting a united front not to see a disruption to the auto industry.
Matt Blunt, president of the American Automotive Policy Council, which represents General Motors Co (GM.N), Ford Motor Co (F.N) and Fiat Chrysler Automobiles (FCHA.MI), stopped by the talks hotel to chat with negotiators, answer questions and “glean information” about U.S. negotiating objectives.
Union workers and farmers protest as NAFTA renegotiation begins in Washington, D.C., in Mexico City, Mexico August 16, 2017.Carlos Jasso
However, he said insights into the talks were hard to come by, as negotiating teams had not yet revealed details of their proposals to each other. “There are a lot of poker-faces around here,” he said.
He wasn’t the only American lobbyist floating in and out of the hotel. Some held lunch meetings in the hotel restaurants and then returned to their downtown offices. From mining, to textiles to dairy farmers, various groups held sideline meetings.
About 100 business representatives from Mexican companies waited in a meeting room to see if there were any questions negotiators might have for them. And Canadian industry groups mostly worked on their own.
Union workers and farmers protest as NAFTA renegotiation begins in Washington, D.C., in Mexico City, Mexico August 16, 2017.Carlos Jasso
For the most part, the business groups presented a united front.
Juan Pablo Castanon, president of the Mexican business group Consejo Coordinador Empresarial, said his group has been working with the U.S. Chamber of Commerce for three years. After the November U.S. elections, they began working to tout the benefits of NAFTA.
“The level of contact and communication is intense and one of collaboration,” Castanon said.
The U.S. Chamber of Commerce, the largest business lobby in Washington that represents companies big and small across the country, confirmed they plan to attend all the sessions – where they expect to hold sideline meetings with other business groups and government officials. The Chamber may also hold sideline events or briefings during future discussions.
Even industry groups who weren’t in agreement with their North American counterparts found other stakeholders to discuss common ground.
The Canadian Dairy Farmers are at odds with their American counterparts, but still found a chance to talk, said the Canadian group’s spokeswoman Isabelle Bouchard.
“To have discussions with counterparts within our own industry and even different industries who are in similar situations than us, it’s important and we have seen though past trade negotiations how important it is,” said Bouchard.
Reporting by Ginger Gibson and Anthony Esposito. Additional reporting by David Ljunggren, Lesley Wroughton and David Lawder; Editing by Nick Zieminski