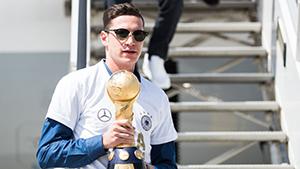 Arsenal could be set to bid again for PSG’s Julian Draxler and there’s more on Manchester City’s interest in Jonny Evans.

Barcelona are closing in on the signing of Paris Saint-Germain winger Angel Di Maria.
DAILY MIRROR

Manchester United have not given up on Ivan Perisic – with a £39million offer to Inter Milan still on the table.

Barcelona will “fight” to sign Philippe Coutinho up until the transfer window closes with the growing expectation that they will soon submit an improved offer after Liverpool flatly rejected a bid of £90million.

Slaven Bilic is confident that he will not be faced with another player demanding to leave West Ham if Liverpool try to replace Philippe Coutinho with Manuel Lanzini.

Tottenham have been outbid by Lyon for Pape Cheikh Diop but the Celta Vigo starlet is won over by the idea of a move to London.

Steve McClaren held positive talks this week over a move to Maccabi Tel Aviv but has decided not to head to Israel for ‘personal reasons’.
THE TIMES

Arsenal are considering renewing their long-standing interest in Julian Draxler after Paris Saint-Germain decided that the winger is surplus to requirements following the arrival of Neymar.

West Ham are ready to hand Manuel Lanzini a new four-year contract and will resist any moves from Liverpool to lure the Argentine to Anfield.
DAILY RECORD

Scotland international Robert Snodgrass is ready to escape from the West Ham wilderness by moving to Newcastle.