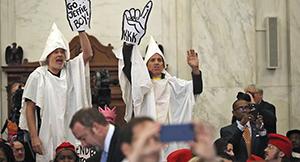 The state of California joined the city of San Francisco this week as plaintiffs in a lawsuit against the Trump administration for what critics call “pure” instances of racist immigration policies.

On Wednesday, US Attorney General Jeff Sessions delivered a speech in Miami where he said “sanctuary jurisdictions provide safe harbor for some of the most dangerous criminals in our country. That makes a sanctuary city a trafficker, smuggler or a predator’s best friend.”
Miami-Dade Mayor Carlos Gimenez recently scrapped a policy that refused to detain people on local charges as federal agents pursued their deportation for immigrating to the US, prompting Sessions to fly down and celebrate.
The Trump administration’s Justice Department has implemented a policy to restrict federal public safety grant funds for sanctuary cities that resist compliance. California is the first state to challenge this policy, arguing that the executive branch can’t withhold money from a program sanctioned by Congress, the legislative body of the US government.
Sessions’ comments are “disgusting, outrageous, inhumane” and exemplify “pure racism,” said Juan Jose Gutierrez, director of the Full Rights for Immigrants Coalition, while speaking with Radio Sputnik Loud & Clear host Brian Becker.
Sessions’ charge isn’t just morally heinous, it’s false. Sanctuary cities that don’t cooperate with federal requests to deport immigrants “have said, very clearly, that when serious crimes are involved, they would cooperate with immigration authorities,” Gutierrez explained. So when it comes to cracking down on gang members, municipalities like San Francisco are still open for business. But for potentially trumped-up minor offenses, these cities will not cooperate with federal immigration authorities, he said.
If California and San Francisco’s resistance is effective, the lawsuit “could help lay the foundation for state legal efforts against the administration should the legislature approve a sanctuary-state bill that would prohibit local police officers and sheriff’s deputies from enforcing federal immigration laws,” Governing.com reports.